##Background and Definitions
The goal of this motion is to provide a Tier 6 (T6) source for recovering the T4 network when it falters. Toward this end, strict definition for the ebb and flow of T4 reserves needs to be found. Fortunately, precedence can already be found in the aforementioned motions. The number corresponding to the weekly buyback amount in US-NBT is a powerful tool, allowing both a positive and negative result. This motion will attempt to use that number to specify amounts for NSR dilution events.

The Standard will be adopted as a naming convention for the number previously referred to as the buyback amount. This will be done to reflect the positive and negative nature of that number and to provide a convenient means by which shareholders and investors can monitor the health of the Nu Network.

##Core Calculation
The standard (ST) is calculated each week by estimating the core T4 bitcoin reserve value in units of US-NBT, subtracting 15% of the Circulating NuBits (CN) in the network, and multiplying the difference by 5%. These two numbers are called the reserve target (15%) and the reserve velocity (5%) respectively.

##Auxiliary Dynamic Reserves
###Parameters
T4 reserves other than the core Bitcoin reserve should interact with the standard as well. Discovering a balance for NSR buybacks and investment diversification is a daunting task for a decentralized organization, and a generally applied method should be used. Each reserve will have a target, a velocity, and a threshold; the Peercoin reserve is the first auxiliary dynamic reserve with a PPC target of 5% (PPCTR), a PPC velocity of 10% (PPCV), and a PPC threshold of $1000 (PPCTH).

###Calculation
During the weekly core calculation, an auxiliary dynamic reserve is given the standard times the flow for that reserve, subject to the reserve threshold. For example, if the standard were $1,500 then no NSR buybacks would occur but $1,000 would be given to the PPC executor. A negative standard will trigger sales of dynamic reserves. If no executor is available or some other unexpected occurrence greatly increases the risk of market actions, T4 supervisors have the authority to skip those market actions for the week.

###Overflow
During the weekly core calculation, if a reserve would be given funding over its target, restrict the funding to the bring the reserve only up to target. If a reserve is over target, the surplus will be sold similarly to bitcoin overflow using the target, velocity, and threshold to determine the rate of market action. A concept of an auxiliary standard (such as the Peercoin standard - PPCST) is mathematically helpful in this stage.

##Antiquation
The following motions are considered effectively replaced by this motion and will have no bearing in the future actions of the network except as examples of appropriate behavior:

Proposal created with Daology.org by nagalim for Nu

What is the main idea of this proposal?

The goal of this motion is to provide a Tier 6 (T6) source for recovering the T4 network when it falters.

First line. I admit, I should redo the background. It kind of leaves off in the middle of a sentence, lol. I’m just having trouble with daology recently. I’ll rewrite it soon though. 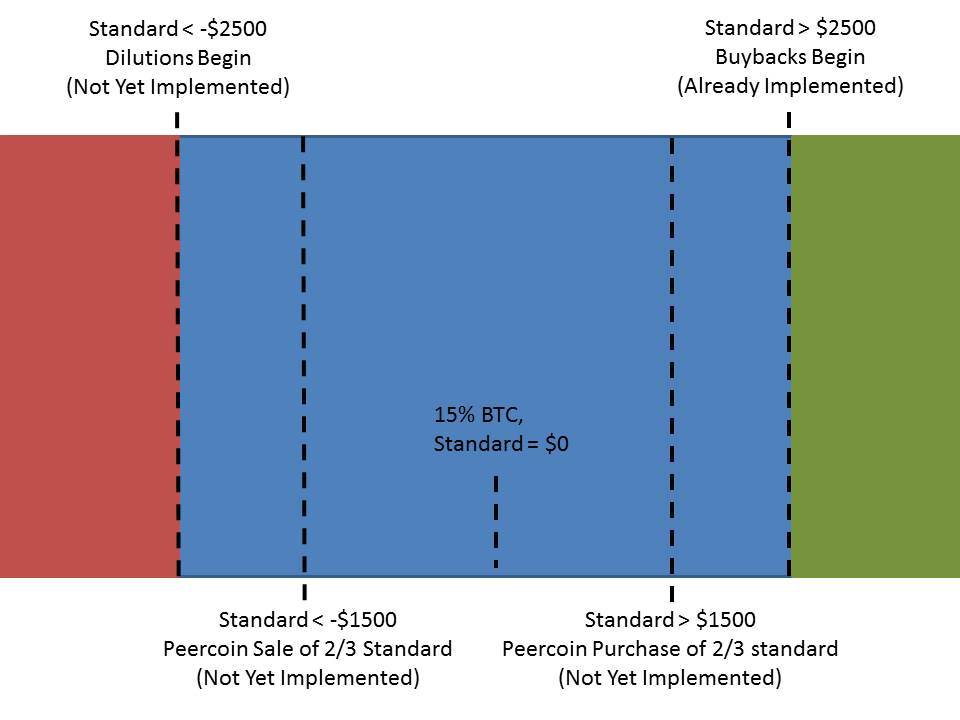 Lots of changes, added 1 or 2 lines of math to most parts just as a summary.

I have the feeling and numbers might be able to prove this in the near future, that we come into an area in which a motion like this would help refilling liquidity reserves value by selling NSR.
Nu needs reliables reserve to keep its trustworthiness, to keep the peg safe and sound.

I’m aware that shareholders don’t like seeing NSR being sold, causing dilution.
After so many weeks of NSR buybacks it wouldn’t be a disaster to try an NSR sale as well

Without a surge in adoption Nu will be in need of a scheme for NSR sales. The developent funds of Nu and BCE exceed the BTC reserves.
It’s time for a motion like this one!
If there’s support for the motion I drafted some time ago: [Voting] T4 buy side / BTC - maintaining and refilling value there should be even more support for this motion as it’s much more advanced, includes PPC reserve, etc.
Discuss and vote now while there’s still plenty of time!

I feel like most people are on board with the first few sections of this motion. I’d like to draw attention to this portion and ask for comments:

During the weekly core calculation, an auxiliary dynamic reserve is given the standard times the flow for that reserve, subject to the reserve threshold. For example, if the standard were $1,500 then no NSR buybacks would occur but $1,000 would be given to the PPC executor. A negative standard will trigger sales of dynamic reserves. If no executor is available or some other unexpected occurrence greatly increases the risk of market actions, T4 supervisors have the authority to skip those market actions for the week.

Specifically, I’d like to note that the total rate of change of the BTC reserve during extreme scenarios will be 1.667 (=1+2/3) times the standard. This equates to 8.33% per week of our debt or surplus.

This is now completely independent of the outstanding nubits motion (I’m assuming that an explicit outstanding motion will replace the circulating terminology here even if this is passed later) and up for voting.

I’m aware that shareholders don’t like seeing NSR being sold, causing dilution.After so many weeks of NSR buybacks it wouldn’t be a disaster to try an NSR sale as well

Maybe it is time to show the balance in more detail. When the burn rate of the development funds threaten to exceed the reserves and NBT sales are stable or slowing than it should trigger a response as this motion suggests.

Other networks talk about another IPO and new investments which basically an NSR sale is, to cover developments and we talk about dilutions but it is basically the same. Maybe we need to market things a bit better without deluding people of course.

To prevent dilutions of your shares one will have to invest in buying a similar share as your current holding in the new NSR brought to market. Maybe we shouldn’t bring shares just to market but provide existing shareholders with the opportunity to buy new shares equivalent of their holdings before bring them to market? I appreciate the complication of having anonymous shareholders, but I’m sure there are ways around that at protocol level and an executor.

How would that motion compare to previous monetary policies in terms of triggering T6 when T4 fails?

There is only one policy in place right now and it takes effect after 1 month of setting park rates and is basically unresponsive to any network parameters. Essentially, without this motion we will be dead in the water as far as recovering the peg with T6 reserves. Kinda like what’s happening right now.

Im actually super disillusioned with the lack of comments or voter participation in this motion considering how low our standard is.

We’re not totally dead in the water.
But we’re bound to the discretion of FLOT, which is in terms of accounting worse than having a set of rules.
Somebody can pick up what I tried to start here:

Dear fellow NSR FLOT group members, as the recent balancing efforts drained the BTC reserves to 82 BTC and considering the next balancing transaction I proposed will reduce the reserves 35 BTC, I want to start discussing an NSR sale. I’m aware that there’s $30k in NuSafe. I intend to use some of those funds as well for two reasons: it’s was NuSafe was made for - being a stable reserve; let’s use it as such to test the process of releasing funds from NuSafe I’d like to convert half of NuSa…

Alas I won’t be pushing any further

For the record: I won't push the NSR sale any further, nor will I monitor the liquidity situation closely. I will - of course! - be available to sign FLOT tx or explain why I refuse to do that.

Because I’m fed up with doing work for lazy shareholders:

I seriously consider retiring from my FLOT roles.This is not what the deal when proposing for a FLOT role was supposed to be.

Or should I just quote you and edit small parts?

Im actually super disillusioned with the lack of comments or voter participation in this motion considering how low our standard is. at all

All right. I ll be probably voting for it at my next update, hopefully today.

All right. I ll be probably voting for it at my next update, hopefully today.

I’m interested to see how your one data feed affects the number of votes.

I’m interested to see how your one data feed affects the number of votes.

You will have to wait for another opportunity

This one is on my shortlist, will also add this to my datafeed. It is just the complexity and a number of changes to the proposal that I kept it on hold. It took me a while to get my head around while being distracted by operational issues.

There’s a slight typo that i want to head off at the pass. When I say ‘sell ST’ and the standard is negative, i really mean ‘sell absolutevalue(ST)’. I think this should be somewhat obvious and dont think it’s worth a rehash.

I think shareholders are holding intentionally. It’s a dangerous game, but I agree that it would be better if this motion were implemented while the standard is within the band rather than doing a hard transition to dilutions.

Eventually, if we keep park rates for another couple weeks there will be a dilution either way. I’m hoping that’s when this will pass.