The dollar collapse will rock the world: jeff berwick on the sgt report

Libertarian, Bitcoiner, Chief Editor of The Dollar Vigilante JEFF BERWICK is interviewed by the SGT Report 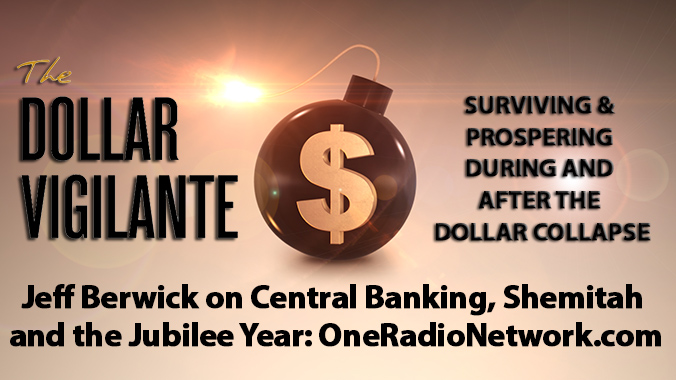 The Dollar Collapse Will Rock The World: Jeff Berwick on the SGT Report - The...

At 14:08, Jeff: “We need a currency that is not controlled by anybody – things like Gold, Silver and Bitcoin…”

Too bad his call about the Shemitah, which is the seventh year of the seven-year agricultural cycle mandated by the Torah for the land of Israel, never happened. Or actually, it did happen last week, but with no significance

We have already seen a market crash in aug… That was the trigger. The crisis will get worse and worse over the next weeks. The shemitah can predict things with a few weeks accuracy. Pretty good over cycles of 7-y.

LOL. The dollar is so far from crashing. Fear mongers should brush up on their technical analysis skills.

The indices are just making a much needed correction. Bitcoin is still pretty lame in the global economy. Gold and Silver are still in a down trend. Relax. Panicking fish are the ones that people like me make money off of.

That’s a financial fact – the Dollar will crash.
Now, I think that is the main reason why Nubits is so unpopular among libertarians, bitcoiners and other crypto enthusiasts, despite doing a great/honorable job at being a stable currency. Something that should be absolutely useful, at first.

While I don’t share this perspective about the US dollar, I do wonder if we have underestimated the impact such perspectives have on NuBit adoption given that we exist in the Bitcoin space right now.

I think NBT would far outweigh newcommers to the space simply because of how many exchanges have adopted NBT pairs and such factors. Given enough time, the initial advantage NBT had would dwindle of course and things would equilibrate. I think 6 months is a short time. However, a year later I think we would see NuYuan a little below NBT but substantial (maybe 80%). It depends how we do the inflation adjusted currency. I’d so love to get something like M0 up in here (every Txn has a vote on the M0 supply, or something like that).

We are shifting from a world in which the US dollar is the reserve currency to a world where the financial system is based on SDRs: a basket of currencies + gold. In that basket of currencies we have the US dollar, the Yuan, the Euro, the JPY and others, it seems.
So I believe the US dollar will still be there but its role will be downgraded significantly.
It could crash overnight but the world economies are tied to it. So they need to gradually get away from it. That is what the Chinese, the Russian, the Japanese are doing: they sell US treasuries, and use other currencies to settle important payments (ex: oil).
It is obvious that the US government has been printing money since 01APR15 without having updated the debt ceiling.
Because of that, a government shutdown is likely at the end of Sep 15.
My point is that it would be extremely painful for the world to have a dollar crashing overnight. So countries are striving to prevent such a sudden change from happening on a single day. Nevertheless, it is obvious that the purchasing power of the US dollar is overvalued. So it is fair to say that the US dollar will be devalued: 25%, maybe 50%.
So what does it mean to NuBits?
It means that NBT could see its purchasing power divided by 2.
Would it a problem?
I would argue that it would not be a huge problem if it happens gradually.
If it happens overnight (it might be) it would be painful for people that put their savings into NBTs and the liquidity providers.
However I believe we must consider at the same time the possibility of a flash crash.
This is in fact the new type of crashes we have seen so far with the Aug crashes.
Those crashes were caused by rapid frequency trading (computer generated) with which humans cannot compete.
For that reason, I believe we should seriously consider the creation of a SDR-pegged or a basket of commodities-pegged NBT (let us call it SDR_NBT) just in case the US dollar is devalued suddenly.
Since such a sudden devaluation is less likely than a gradual devaluation, SDR_NBT should not be the main value proposition (the main product) of Nu but nevertheless it should be one of our products.
At the same time, as pointed out by @crypto_coiner, it would be a way to attract libertarians and pure bitcoiners to Nu.
Finally, some of the competition chooses SDR over the USD as you can see here for their peg.

To conclude, I think Nu should start a whole dedicated project into SDR_NBT.

I totally agree. If we explain it the way you explained it, the average Bitcoin user might as well be interested.

@cryptog beat me at it – great answer from him.
I believe NuBits product has proved that the Nu pegging DAC is working and that we can apply it to other fiat currencies.
Between an inflation adjusted currency and a NuYuan, I would wage for the second –
The reason being that we would need to rely on US-released data to adjust the peg, and whatever is US-gov issued is not trusted among bitcoiners/crypto users.
In contrast, as pointed out by berwick and many other crypto enthusiasts, the Chinese gov has bought much GOLD for many years, creating an implicit chinese gold standard.
In 6 months from now, I believe a NuYuan could have 10 times as much marketcap as our current nubits valuation.
But both could co-exist and several other options too.

do you think they let the dollar to collapse?
i wonder why we even think this is possible since the dollar is backed by a country which is the leader
of the planet! unless USA is collapsing as a country!

Collapse, in the sense of a devaluation over-night vs the YUAN for example.

i remember Yuan was the one that was undervalued during summer by Chinese government? or not?

While I don’t share this perspective about the US dollar, I do wonder if we have underestimated the impact such perspectives have on NuBit adoption given that we exist in the Bitcoin space right now.

When it is about perspectives, I believe the Bitcoin community would rather uptake a SDR backed coin and run away from any government specific fiat. SDR makes sense as it is a basket although still controlled by a government. But at least a step in the right direction.

I have my doubt about the usability and uptake though, it would more be a coin for savings and protection against devaluation or fiat. The disadvantage is that its value wouldn’t equal anything known and therefore not easy to calculate with for daily usage. At least as easy or difficult as Bitcoin.

The user value of Yuan pegged coin would be recognised by about 1/3 of the world population, but 99+% doesn’t have any exposure to crypto currencies. The question is which market is larger in the short to medium term. I don’t have the answer. It is a bit of a bet I believe.

Betting on both would be best, but the question is whether we have the resources to look after both. I doubt it. 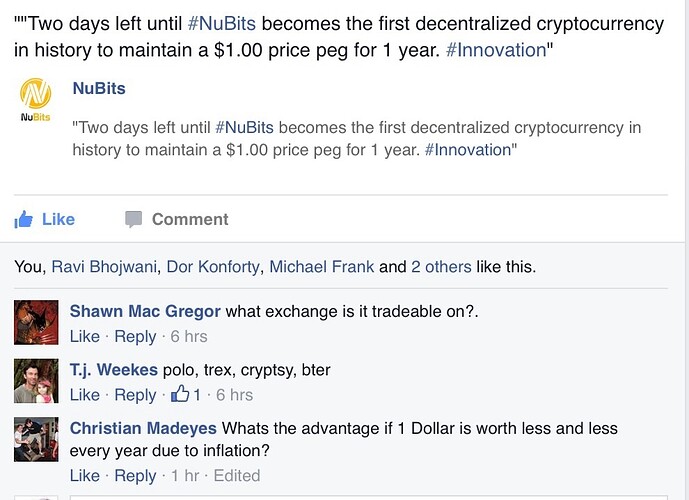 Last comment:" Whats the advantage if 1 Dollar is worth less and less every year due to inflation?"

Last comment:" Whats the advantage if 1 Dollar is worth less and less every year due to inflation?"

NBT is not an asset or a stock, NSR is. NBT is a “digital USD” and the best way to negate BTC and other digital cryptos’ volatility! There isn’t any rock steady fiat in the world long term and it will “never” be!