[poll] I like JordanLee and Phoenix for his/their proposed plans

@Phoenix
I don’t have as many likes as most of you, but that doesn’t matter much, because I have 343 likes on the blockchain in the last 1000 blocks.

What if you have bought all your 343 likes with your shares? Can somebody run a poll to see how many ppl “like” phoenix and jordanlee?

Show results
2 Likes
Why bother when Jordan hasn't shown for days?
[Passed] Elect Phoenix as Chief of Liquidity Operations (compromise version)
Voting address census: who are voting for what
Chronos June 29, 2016, 3:49am #2

Based on the results so far, it seems that Jordan still owns a lot of NSR. I’m impressed.

Most forum participants laughed and mocked my candidacy at first, but shareholders didn’t.

Phoenix suggests here that the majority of shareholder voting power is not represented by user identities on this forum. Either he owns a lot of NuShares himself now or Jordan probably has a lot of friends who bought in when the initial sale was still going on and he has convinced them to support him.

The history has been written. The market has spoken. NuBits were nearly destroyed by incompetent actions of the mob here. I personally saved it with the support of smart shareholders. It is time to accept what happened. The losers around here ought to either get behind a winner or leave.

But don’t I deserve a raise?

Finally, I will remind everyone that Jordan Lee told you in no uncertain terms that the network needed to do essentially what I am doing. He was right. The drop in NuBits was completely unnecessary and would not have occurred if liquidity providers had listened to Jordan Lee. Still, so many persist in their stupidity. The blockchain doesn’t care.

Maybe these unknown shareholders should come on the forum then and replace us all. If we truly don’t know what we’re doing then I’m sure they’ll do a much better job when taking over our responsibilities. Where are they?

Tks for your honesty.
Good luck for finding collaborators to work with you on liquidity provision, though.
It is gonna be tough.
You need to find friends, coz here it does not seem to be the case sadly for you.
I ll recognize that you were right if under your regime nsr market cap reaches a new high.
In the mean time i will not participate into liquidity operations what so ever except dealing with FLOT.

I ll recognize that you were right if under your regime nsr market cap reaches a new high.

As will I. I’ll admit that you were right if you really can turn things around, but the current name calling and disrespect doesn’t really encourage me to participate any further. I’d rather just hold my shares and observe how the situation unfolds.

Finally, I will remind everyone that Jordan Lee told you in no uncertain terms that the network needed to do essentially what I am doing. He was right.

So you are NOT Jordan Lee, can you confirm this?

I hope that your broad lack of respect for forum participants will force at least some of them to invest in NSR and provide votes for alternative motions.

It’s the kind of effect his calculated moves try to have.

at least some of them to invest in NSR and provide votes for alternative motions.

It’s the kind of effect his calculated moves try to have.

Maybe, but that doesn’t mean I would stop voting. If his plan is to drive away shareholders that disagree with him so that only his votes are left, it won’t work on me. All I want from him right now is a realistic answer to my question linked below, but for some reason he can’t provide it…

About the stunning improvement in the network's prospects

@Phoenix, as owner of 1% of Nu, I want you to answer something for me if you want to have a chance at earning my support. I know your focus is on restoring the peg, but lots of shareholders as you can see are hesitant about restoring a peg that they believe is most likely going to collapse again if nothing is done to change our revenue situation. Let’s say your plan works and we restore the peg and achieve 100% reserves. What happens after that? How do we sustain liquidity provision at a 1% sp…

Only 39 connection nodes in Nu’s network, and 19 votes in this thread, which means other 20 Nu miners like phoenix and will not vote for this pull. 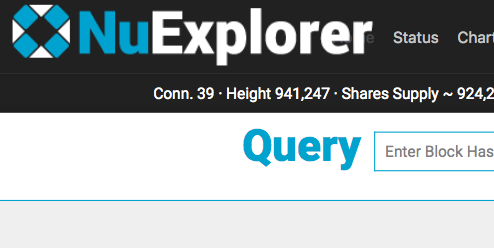 The same plan as before.
If the peg is tight with a lot of liquidity , then businesses will find ways to use nubits which would create more demand for nubits which would create more liquidity and so force and so on.
So basically there is no biz model in the liquidity engine model. Just maintain the engine.
It could be compared to a ponzi scheme as some people pointed out but you could argue that central banks are ponzi.
In any case Nu is getting under this scheme so you do not have choice right now.
Maybe phoenix is a central banker and Nu is just the first central bank working totally inside internet regardless of its decentralizedness.

it didn’t happen in teh last 1.5 years. it has no reason to happen soon if nothing is changed.

In any case Nu is getting under this scheme so you do not have choice right now.

not if @Cybnate’s motion gets approved.

Well the difference is that phoenix would be basically the only node to take care of the operations so there would be increase in speed and responsiveness.

Yes i am waiting for cybnate proposal.

would be increase in speed and responsiveness.

we will see about that.
plus it wasn’t speed or responsiveness that killed the peg. selling lots of nsr in an adverse environment is hard no matter how fast you are. watch it now.

it didn’t happen in teh last 1.5 years. it has no reason to happen soon if nothing is changed.

The argument from what I understand is that the quality and quantity of liquidity we offered went downhill after the hacks, which significantly reduced demand and prevented the model from succeeding. Who really knows though.

Don’t underestimate the support of Mr. Bean and Superman!

I don’t blame just on JL. Some of our former developers were greedy and they robbed a lot of money from us without giving а reliable product.

Some of our former developers

Who are these guys?