This is the thread in order to make available the details about the passive Nubot gateway in Poloniex and to report the status and other information.
A level 3 account is created in Poloniex connected with my main account and secured by 2FA.

The Poloniex addresses that FLOT may use to send funds are: 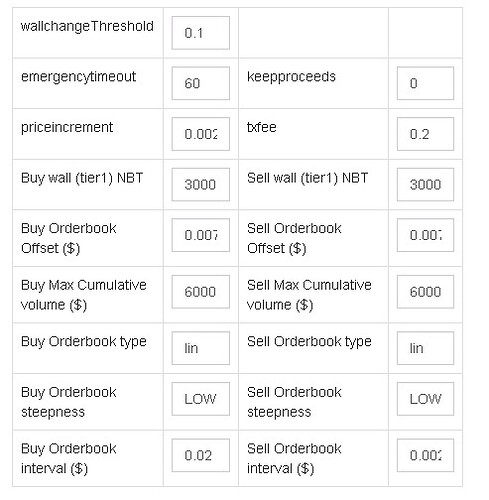 Moreover, the nubot will run with -skipCredential key since i have trouble with it! Liquidity will be reported though.

The API credentials are “can trade” only, right? This is rather important.

I will use the config i see in MoD’s thread

The config you pasted is rather outdated. I could enable the parametric order book again, etc.
This assumes a Nu wallet in server mode is running on the same machine.
But I think that part of the setup is already complete, right?

I recommend to lean on this config:

The priceincrement seems to be effective only in sellside mode.

The API credentials are “can trade” only, right?

Thanks for the new configuration.

There was a recent issue with the strea server. I don’t know whether that’s been fixed.
@desrever, is
"bypassStreaming": false,
ok at the moment?

This is a requirement to use the stream server as far as I understand it. There might be more than one custodian running NuBot on the same exchange and order collisions can be prevented using the stream server and
"multiplecustodians":true,

These are working for me.

You can choose whatever webport you like.
Are you sure that the stream server is working? Does your NuBot move orders, if the BTC price moves?
That was the issue that made me bypass the stream server: the orders didn’t get moved…
Have you tested it?

Make your account empty as soon as you have finished the testing (or note the funds you had there). This will make accounting much easier. I only had $5 or so from testing on the accounts (because of the minimum to have NuBot place orders).

No, i haven’t. I have to sent some funds in order to test it!
the stream.tradingbot.nu:8889 is not working indeed.

the stream.tradingbot.nu:8889 is not working indeed.

I think it’s for one the wrong port and totally not working at the moment in addition.
Try
"bypassStreaming": true,

Well, this is very strange!
stream.tradingbot.nu:5556 reports that connection is OK
but nubot is not placing any order!

stream.tradingbot.nu:8889 reports that it is NOT OK
but order are placed and liquidity is reported!

Now it is working

Isn’t better to lower the bookSellwall and bookSellMaxVolumeCumulative
in order to minimize the risk of funds after a nubot failure?
Considering that more nubots and ALPs exist in the field.
I am thinking of 500 and 2000.

There are two risks:

NuBot orders being filled means, the ALP before that failed.
I’d rather have some more funds than $500 in that line of peg defence at 1% offset (or 1.6% SAF).

The NuBots ran remarkably stable.
Each time their orders were traded, they made Nu money from the offset.
That could compensate parts of the hedging risks.

So my conclusion is: more funds on T1.1!
The parametric order book will make adjacent orders even more expensive

The main risk i see is a power and internet outage (during sleeping, Murphy’s law)
The orders will remain and in a big BTC volatility, NU’s funds will take a hit!
This can be reduced with small walls and a lot of different nubots.
Even different nubots (from different IPs) managing the same account will reduce this risk (i just made a feature issue in bitbucket)

The orders will remain and in a big BTC volatility, NU’s funds will take a hit!

During volatile times you’ll likely lose more by being used for hedging if the NuBots are running properly.
So if the NuBots fail in such a time, it will be cheaper for Nu in terms of direct loss, although the peg might receive a dint.

There was a recent issue with the strea server. I don’t know whether that’s been fixed.

can set it to true now!

The NBT already arrived on the account. I’m waiting for the BTC to arrive as well and withdraw funds from my accounts to FLOT afterwards: