This account will be conducting NSR buybacks in accordance with this motion. Each buyback week a new thread will be created for shareholders to monitor. At the conclusion of the week the final results will be posted here along with a confirmation link showing the NSR burn. The thread will then be locked.

The only goal of this account is to purchase as many NSR as possible each buyback week to be destroyed using the funds provided by shareholders. A successful NSR burn will result in all shareholders attaining a larger equity percentage of the Nu network than they held before the NSR burn.

If you would like to sell us your personal NSR for less than 70% of the market price each week, send an email to nagalimnu@gmail.com to negotiate a deal.

The previous 2 weeks were skipped due to buyback funds being lower than the $2,500 threshold. This is the 22nd buyback.

Buy walls are set. Sorry for the late timing.

Someone really wanted to sell.

Are you referring to this: 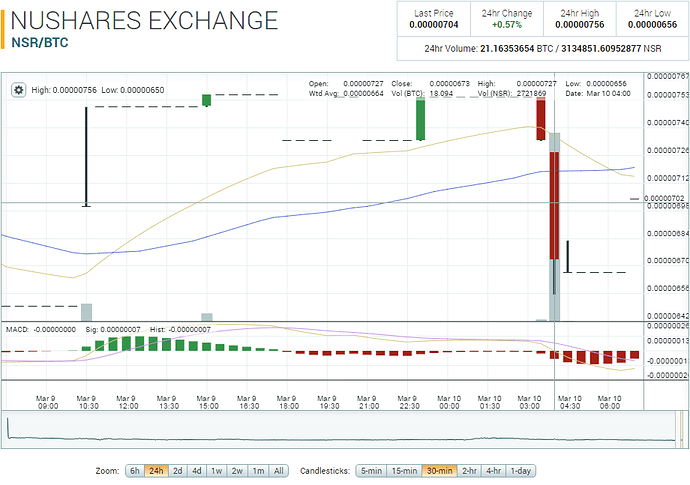 Yes. Buy orders weren’t all scared away though.

This is really strange! For the previous weeks that no buybaks were available, i tryied to immitate them by setting some “big” orders in buy side at 80-90% of market price.
I didn’t sell anything!!!
What can we say about this selling behaviour?

It takes time and effort and risk to move funds to exchanges from say paper wallets. Unless you put up big buy walls, you won’t attract the kind of big buyers.

What can we say about this selling behaviour?

That this week somebody desperately wanted to sell NSR

You mean that in every buyback week there are desperate sellers

I hope this is the reason.

Good idea!
Sounds like shareholders who care for the network even if they want to sell shares. A twisted thought, but entirely possible!
…and without freuquency voting a very wise move!

good point. get btc for one’s sold shares and get increased scarcity for the unsold shares.

It is a possibility. “Whales” that don’t want to give voting power to others (new shareholders). This is also good and bad.

@masterOfDisaster i am also intrested to know why is someone dropping so much at that price every buyback week. I guess someone found out buyback isnt going to happen each week so he wont get desired selling price so he sold at same price as he bought before. it is just my guess.

The circulating NSR supply is now 792,881,487 NSR, not counting FLOT funds. Please keep an eye to this page for running totals.