Liquidity Operations will not increase NSR sales due to a rally

Since March 12, NuShares have risen from $1.34 per voting block to $1.85, or 10 satoshis to 16 satoshis. It is a gentle and immature rally. At times in the past when we had less reserve, liquidity operations reacted to an NSR bull market with a substantial increase in the rate of NSR sales. I am writing this to make clear Liquidity Operations will not increase NSR sales beyond what our standard formula based on deviation from reserve equilibrium prescribes. Right now that is $228 worth of NSR daily. It changes every week, but only slightly, and usually the daily sale amount goes down. Even if NSR jumps up to 100 satoshis, liquidity operations will not introduce additional NSR into circulation as a reaction to an NSR rally. In fact, it is certain that we will bring less NSR into circulation in reaction to a rally, because we won’t need to sell as many NSR to meet our daily sale amount, which is measured in USD. Increased sales are not necessary at this point because we are so close to reserve equilibrium and NSR buybacks.

May the rally proceed unimpeded!

A good NSR rally is what we need to fund stepped up marketing and value building initiatives like an integration of CryptoNote (aka Monero) privacy technology. So to people considering making NSR purchases now, if there is enough increase in the price, we can fund extra efforts to bring value that are intended to inflate the NSR price even more with additional currency sales.

I would like remind everyone the policy of liquidity operations remains the same as it has been for some time: we will not sell additional NSR as a result of a rally, including the sudden rise to 47 satoshis on over $500,000 volume.

We will continue to use our model revolving around the deviation from reserve equilibrium to calculate the size of daily NSR sales, without change. Right now that is $312 worth of NSR. At the current price of $2.56 per voting NuShare, the quantity of NSR sold each day will be less than at any time since NSR sales began in July. The inflation rate of NSR is expected to continue to drop as the price rises, from 16 or 17 percent annualized, where it has been recently. NSR continues to become more scarce.

May the rally proceed unimpeded!

In the interest of maintaining my impeccable honesty, I feel a disclaimer is in order that while it is our policy to sell $312 worth of NSR each day, we have been unable to sell NSR the last few days due to deposit problems at Poloniex. When the problem is resolved, we will catch up for the days we sold nothing with one larger NSR sale. Still, the average daily amount will be determined by the algorithm we have had in place with no increase in NSR sales due to the rally.

Once again, the NSR price is currently spiking at 33 satoshis, or $3.86 per voting NuShare.

Nothing about the policies described in the OP has changed, and I just wanted to remind everyone of that at this time. We just had the smallest daily NSR sale since July, at 482594 NSR. That is less than 0.25% of trading volume in the last day. This changes daily according to a public formula that incorporates a number of values I can’t predict. However, I know of no specific reason the quantity of NSR sales would rise. Specifically, it won’t rise because I have made some kind of special order to sell additional NSR. I am not going to do that.

May the rally proceed!

To rally, or not to rally, that’s the question! 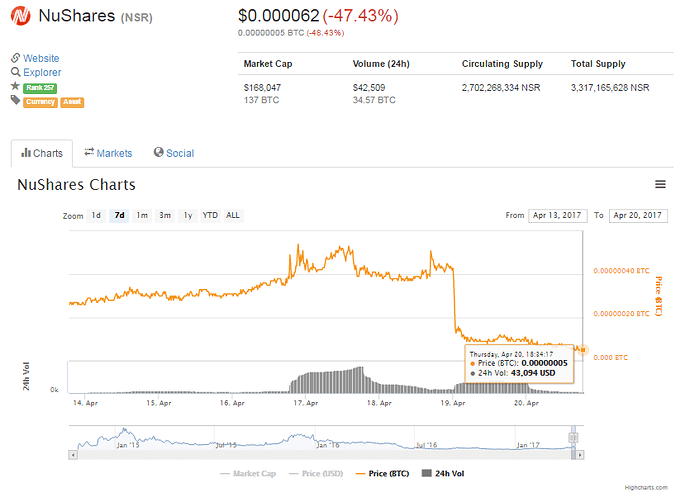 No matter which forum you visit, after such a crash as the one currently happening in NSR, at leasts dozens of people freak out and raise questions. On this forum, nobody says anything. Not a single word after NSR got dumped to oblivion. Imagine any coin losing 7/8th of its market cap within a day or two… In NSR, it is business as usual. Well, I must admit that @Phoenix has mentioned several times that NSR is the most volatile asset to be found in crypto

at leasts dozens of people freak out and raise questions

The people who would freak out have long left. All questions have been raised by now, some have been answered some not. Move on, nothing to see here.

I hope you dumped all your NSR before @Phoenix did

Or maybe he informed those who help keeping this scam alive. Who knows? Do you?

When I bought my NSR I knew it was high risk and an experiment. Never saw it as savings or an investment, mentally written off the lot so I wouldn’t be driven by profit. It was and still is a big learning experience running a pegged coin and all its intracities of a cryptocurrency in general. I got my value for money. Did you? Apparently not, as you are wandering around like a ghost who can’t come to rest. I feel sorry for you. Hope you are able to move on soon.

BTW still happily minting with all my heavily diluted NSR.

I got my value for money

Good. Then @Phoenix got his money for providing value, at least in your case.

Not sure if anyone else got some value in exchange for his or her money. I do know that @jooize got some money, not sure though what kind of value he provided. Oh, I see the problem here. We have different definitions of value I guess. Of course, @jooize provided valuable services for @Phoenix, which, unfortunately, aren’t of any value to anyone not being corrupt here.

It’s not exactly a mystery why the price has dumped. The same has happened to most of the coins being delisted from Poloniex irrespective of the fundamentals of those coins / projects.

What is there to say really… it’s an obvious set back and threat, but who knows how the price will respond once trading settles on cryptopia a few weeks after the delisting?

Other coins have crashed at delisting & recovered a while later. For NU its a bigger threat because NSR sales are currently needed to support NBT liquidity, but generally coins bounce back from this kind of shock & dump, even if it takes a while.