Have I lost my NuBits withdrawn to "Sending address" in NuDroid?

As most people here probably know, Cryptopia is delisting/delisted Nubits (USNBT) so I decided to withdraw to a wallet. One of the wallets that can be used is NuDroid, so I downloaded it for my Android smartphone.

When I opened the NuDroid wallet app, I looked around and went into the Address Book. “Your address” was empty but there was an address in “Sending addresses” (I have attached the screenshot). I thought that was the address to send my Nubits (USNBT) from Cryptopia so I made the withdrawal to that address. However, one day and then two days and now a few days have passed but I don’t see the funds in my NuDroid wallet. It appears that I could have sent my Nubits (USNBT) to the wrong address.

If the address is indeed wrong, where has my Nubits (USNBT) gone to now? Is there any way to recover them?

Thank you in advance for any advice. 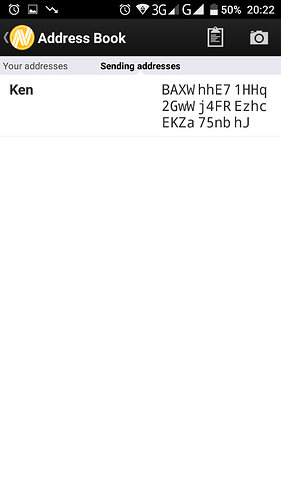 Maybe this is your cryptopia adress,and you send nbits back?

Whoever Ken is has your Nubits sir. Good news is they haven’t moved since you sent them. Link - https://nuexplorer.ddns.net/address/BAXWhhE71HHq2GwWj4FREzhcEKZa75nbhJ/1/newest

I’m sure @Cybnate can help us here!

Does NuDroid indicate that it has synchronized completely?

Does NuDroid indicate that it has synchronized completely?

Yes, it usually shows on the main screen, but if in doubt you can go to Settings (right top corner). One of the options shows you the last blocks it is synced to.

Are “Sending addresses” owned by the local NuDroid?

The poster’s name is Ken, and the address listed is labeled Ken. Seems the NuBits should be recoverable. How do you export an address from NuDroid?

Sending addresses are just that, unless you have sent funds to yourself.

You must have created that address from somewhere though. Did you copy it from your PC Nubits wallet or is it an exchange address? If it is someone else’s address you might try to ask it back if you know that person/organisation.

The address BAXWhhE71HHq2GwWj4FREZhcEKZa75nbhJ was already in the NuDroid app when I downloaded it from the Google Play Store.

The name Ken was inserted by me when I “Edit Address”. Only the name can be changed so I can change the name from Ken to James. The Address cannot be changed at all.

Here is the screenshot: 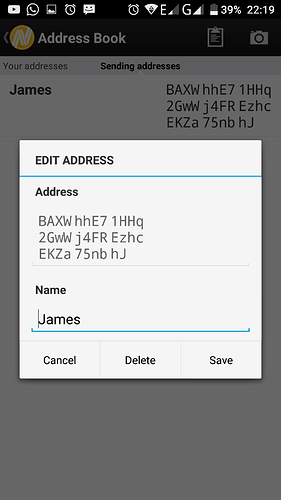 You should apply for a grant to get reimbursed.
What is 353 NBT compared to 224 million NSR?
Nu can even advertise it as being especially customer friendly!

The address BAXWhhE71HHq2GwWj4FREZhcEKZa75nbhJ was already in the NuDroid app when I downloaded it from the Google Play Store.

The name Ken was inserted by me when I “Edit Address”. Only the name can be changed so I can change the name from Ken to James. The Address cannot be changed at all.

That is good. NuDroid generates one starting address. That is actually the address in your control. You just need to get the App to sync with the blockchain now. Have you been able to look into the settings where it is at. It may take a few days to sync from scratch as work to speed this up was unfortunately abandoned.

Are you saying that I should download the Windows wallet app for my Windows PC? It’s with the filename nu-5.2.0-win-gitian.zip

Anyway, I have downloaded it and run the setup so this program called Nu is now installed.

When I open the program called Nu, what am I suppose to do? Please guide me.

She means that you have to keep NuDroid running on your Android device until it has downloaded all blocks in the blockchain which will eventually tell NuDroid that your address contains the funds it was sent.

If you go into Network Monitor in NuDroid, the bold number under Blocks in the following screenshot should be close to what you see in NuBits Block Explorer under Height. At the time of writing it was 1604237. 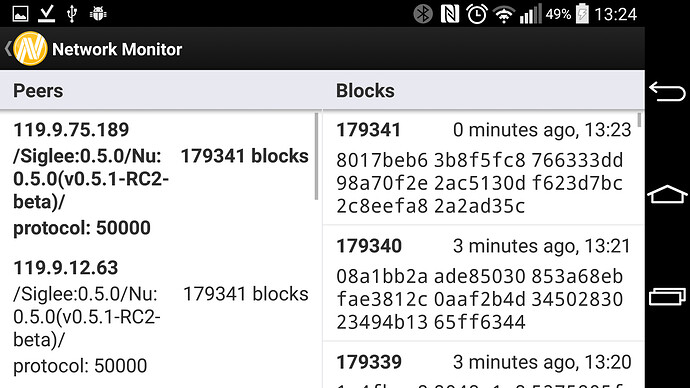 In case it is not, look if there are Peers in the left section, and if new blocks are appearing in the right.

What I see on my Network monitor screens are not quite as expected. Here are the two screenshots here for both Blocks and Peers: 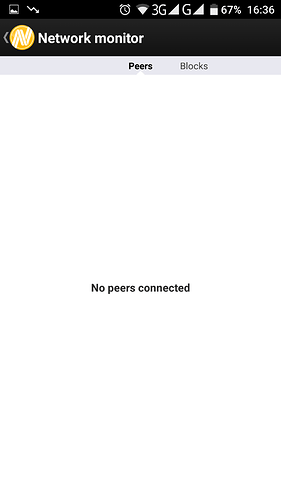 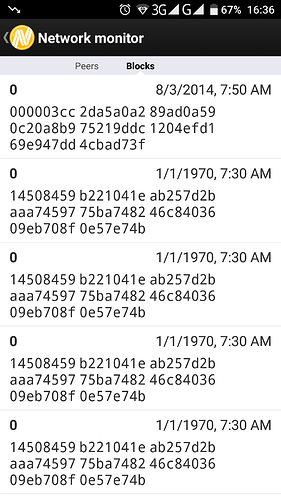 There is clearly a problem connecting to peers. I’m seeing the same after I restarted my client. The developer have abandoned the application and I’m trying to get someone else to work on it. In the mean time I’m open to suggestion on what to do about this, have tried everything but ran out of options. BTW your NBT are not lost yet, we just need to get the wallet to sync again.

I would also like to request that the Nudroid mobile wallet be removed from the Google Playstore, but as far as I know, only the developer can remove it from there.

The transaction that sent your NuBits to the address shown in the original post was in block 1577888. The funds are still at that address so there’s still hope of getting them back (assuming you own the address shown)

Edit: The NuDroid Wallet is still functional, it just has hard-coded addresses in it which it uses to find nodes to scan for blockchain information. It seems that those nodes no longer exist so in it’s default state NuDroid cannot download the information it needs. It is possible to override that behaviour though, as shown above. There is some work to be done to update the hardcoded node addresses I agree but the wallet is still functional.

I’ve been convinced NuDroid is worth continuing development of. As I understood it, there’s still funding available, just no longer a primary developer.

@Cybnate: Do you want to create a thread about what needs to be done with NuDroid regarding development? We can advertise for developers via Recruitee and Twitter. We should also post instructions for using the current version on the website. Is what @woolly_sammoth described all that’s needed?

In the meantime I hope you can take over its ownership in the Android app store.

In the box that pops up type

I figured you can use any node’s IP address. The key thing is to:

Tick the box to

I didn’t think of that when I tried. It is syncing the chain as we speak. I expect it to take about 24-36 hours to finish from scratch.

There is some work to be done to update the hardcoded node addresses I agree but the wallet is still functional.

I agree, will look into that.

Will be interesting to hear as I have trouble syncing beyond 25 April (block 1370617). Have tried to reload two times now. Anyone else facing similar issues or is it just me with a crappy tablet?