we need to sell close to 5 million NSR

I should use a calculator more often. Or sleep. Or stay away from the computer. Or read all posts that I missed.
Thanks for bringing that up!

The 8 BTC FLOT deposit arrived at my Poloniex gateway.
I restarted NuBot to have the funds on oder immediately:

You can watch the liquidity at this NuBot via broadcast address B9gXptkoqAApF3AFrQyhUbhSzvuEudxupt:

I’ll take a break now, but will keep an eye on the FLOT NSR discussion in short intervals.
I’m ready to put NSR on order if they are sent to my Poloniex address and I get assistance to answer the question:
How to sell 2.4 mio NSR in the current market?
Where to start, how to proceed?

Alix walls tell us that most of the T1 liquidity is on ccedk…
Since ccedk trading is shut down that means that we do not have any T1 liquidity any more.

Trading at CCEDK is announced for shutdown at June, 1st.
And we still have some T1.2 at Poloniex

Unfortunately we can’t grant BTC - that would solve the whole problem, lol.

58 posts were split to a new topic: Experiment of Trading Volume at Different Spreads Using a Gateway

Since ccedk trading is shut down that means that we do not have any T1 liquidity any more.

Another surge in BTC/USD:

The peg is not exactly what we’d consider in perfect order - at least not in normal times: 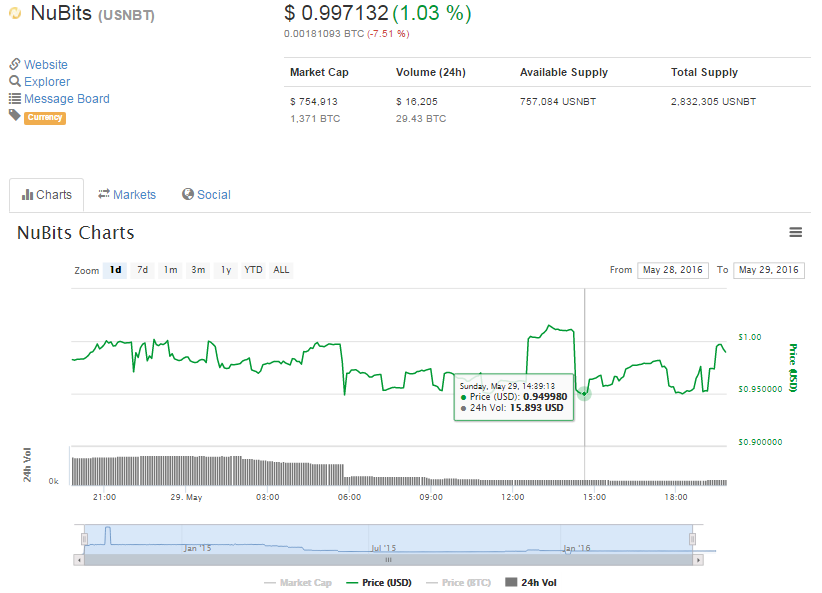 The trade volume has taken hits from the reduced liquidity: 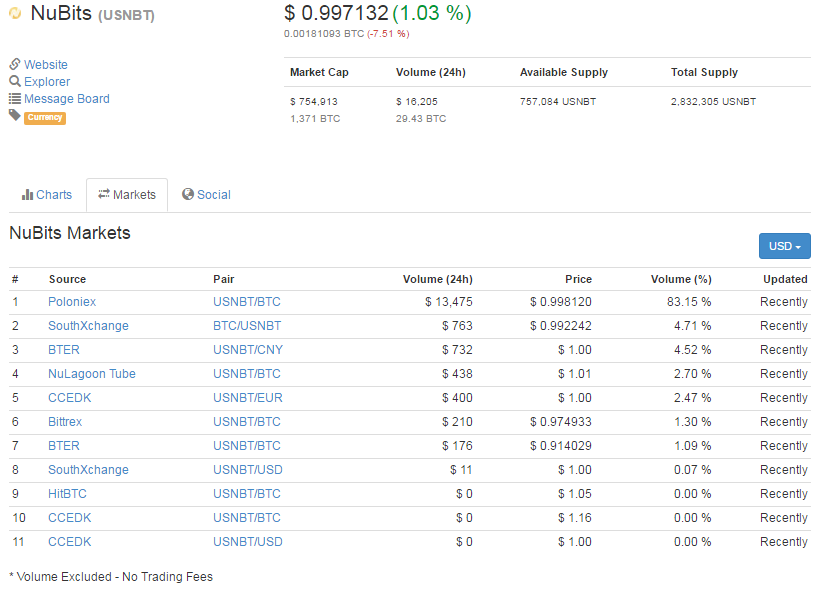 There are still funds on buy side! They get consumed only slowly. The offset is not very attractive - just like it’s meant to be:

Over the course of the last hours some BTC were sold, the sell side of both zoro’s and my NuBot report an increasing sell side volume. But that’s only small amounts.

This is the prime reason, why I drafted this proposal:

Motion hash: bd4d153bb5c2d8cd6013b77ad8780eabc7bae79e To provide an alternative for [Passed] 1% Maximum Spread in Shareholder Funded Liquidity Operations I created this motion. Please continue the discussion in the thread, @JordanLee started to have all arguments in one place. https://daology.org/proposals/107a2e83eb2b5cf7d54e9af4c4b6f5f8d7d4522a Quoted for convenience:

Motion hash: b71a585de0b5e552648036fbc8282e11fea4a1cc This finalized proposal is being managed on Daology here. I will quote it here for convenience: Normally I provide some context and explain the reasons why motions I advance will help the shareholders. In this case, that context was provided in my recent thread about the importance of liquidity and tight spreads. However, I will briefly say that this should dispel the notion that liquidity providers will widen spreads when the peg appears …


is no fit for supporting NBT/BTC. It would be good for NBT/USD.
I’d like to be in a world, where it can be sustained for NBT/BTC as well.
Alas, we aren’t and it can’t in the near future. Nu needs to make a lot of (final!) revenue to sustain such a model.
It’s not possible now.

Given the discussion here and a counter proposal here I believe there is place for another view. Key differences are: Lower spread (0.6%) for ALPs/MLPs to improve liquidity quality (with exemption when high fees are incurred) and with that likely the volumes Medium spreads (0.7%-1.4%) for Nu-funded liquidity but limited to maximum of 30% of total liquidity when ALP and MLP fails e.g. in high periods of volatility as a first line of defence. High spread (1.4%-2.5%) for Nu funded liquidity but …

@JordanLee, do you still think your proposal is the way to go?
What is your conclusion about the current situation and how we treat it?
Would you have preferred having sustained a perfect peg for another hour and complete helplessness thereafter, or can you agree that it’s better to have a demarcation point at $0.95 that seems sustainable for an extended period of time?

Technically you don’t know what would have happened. At some stage the amount of NBT in the hands of traders would be empty. Unfortunately we don’t have a lot of data on how much NBT is held on exchanges. Also unexpected was 1 trader selling of a huge amount at once a scenario we stupidly didn’t prepare for.

I think spreads should exceed 2.5% when reserves are still available. When they run out unexpectedly we see a crises. With a real crises anything should be possible to save the peg. With running out of BTC available to support the peg we should have gone into grinding the network to a halt. I’m glad we choose to support a weak peg instead.

However, I believe some work needs to be done regarding the reserves and managing liquidity, not on changing motions for spreads during crises.

Sure - and raising awareness for flaws of proposals when those flaws are apparent is not welcome?

Technically you don’t know what would have happened.

Are you in favour of getting data this way?

Sure - and raising awareness for flaws of proposals when those flaws are apparent is not welcome?

Are you in favour of getting data this way?

As I said we are in a crises without timely and adequate BTC / reserves. So not a good idea to test now probably.
I just tried to say that we should separate out the way we behave during a crises and how when we have adequate reserves to support the peg.[quote=“masterOfDisaster, post:1783, topic:1239”]
You still don’t trust my experience. Understood.
[/quote]
I get you are not happy, but that is not what I’m saying.

NuBot gateways at a rather high buyside offset and rather small sellside offset are well-funded now:

This is a lot of money that could get lost by exchange default.
I’m aware of that.
Everyone should be aware of that.
Yet I don’t see an alternative that is sufficiently reliable.

I don’t have numbers at hand regarding the exco.in and bter losses, but the debt at ccedk from the February 2015 losses alone is above 30k.
Compared to those losses, the money at stake is in a similar order of magnitude.
Without it, there’d be no reliable peg support, although it’s on a degraded level.
The demarcation point of $0.95 could be kept so far.

In my opinion the value for the brand image is far superior to the funds at stake.
If NBT were to drop to $0.50 (no one knows whether that would happen, but we know that $0.95 is the limit as long as BTC in zoro’s gateway remain and $0.925 as long as my gateway has BTC left), the effect on the total value of Nu would likely be far above $60k.
The drop to $0.95 already cost hundreds of thousands of USD in corporate value.
The $60k is peanuts compared to it.
Plus they are not lost - they are just at stake!

Water level of the gateways at Poloniex

@zoro has traded BTC and received 1,500 NBT. One of the orders at 5% offset was completely traded as it seems.
Selling NBT by NuBots doesn’t happen, although the offset on sell side is small in both @zoro’s and my NuBot settings.

Maybe we have another issue with the price feed.
I’ll have an eye on the Bittrex BTCUSD rate compared to the Poloniex rate.

Would you record your profit? I guess u may self-funded with 5% spread. This is the best chance to experiment your spread theory, without any “obstruction”.

I plan on making a calculation for a NAV at the begin of the operation and the end of it - once my gateway gets put on standby again.

I try to prove one of my claims that with a considerable spread, you can compensate at least some, maybe most of the costs that are associated with using Nu funds for gateways.

Btw. - the spread of my operation is roughly 8%, asymmetrically divided in 7.5% buyside and 0.5% sellside.
That’s why I rarely see trades on buyside. I’m the second line of peg defence after @zoro.
A kind of parametric order book, if you want to call it so.

Do you all realize how calm the situation is thanks to the gateways at increased spread?
Can you imagine how it’d be without them?
Without the gateways, all you had left to give customers asking for liquidity
was a shrug.

Do you all realize how calm the situation is thanks to the gateways at increased spread?

I wouldn’t boast this as a positive. As NuBits holder I’m basically held to ransom, hoping that the peg returns within normal boundaries anytime soon. Best part is that it didn’t go much beyond the 10% spread. BTC price is still rising though, and NuShares sales appear to be inadequate to recover to a normal peg. What is the next step besides hoping BTC turns around?

I wouldn’t boast this as a positive.

Then I suggest you join FLOT and operate gateways that you try to keep balanced or even funded on each side at a closer spread.
It’s indeed positive as we do the best we can considering the circumstances.
The peg didn’t fail completely. It’s just on degraded quality.

Best part is that it didn’t go much beyond the 10% spread.

We are in fact within a 5.5% spread, because the offset is 5% on buyside and 0.5% on sellside.
Do you have a suggestion to improve the liquidity situation without risking the peg we still keep?
Keeping the peg was only on that level was only possible, because we increased the buyside offset.

To revive the liquidity provision it would make sense to close the spread with ALP, by letting them start liquidity provision at a buyside offset of say 3% and letting them tighten the offset until the trade volume is on the level you want to have while still being able to support both sides.
Jumping in at 0.5% offset is not the best idea. Testing the waters, reducing the offset in steps would be a way to recover.

One of the orders at 5% offset was completely traded as it seems.

I guess u may self-funded with 5% spread.

I am very curious to know empirically about the minimum spread that makes gateways self-funding possible, meaning that we would not need to use the funds of Nu at gateways while at the same time pay the operators fees.

In other words, what spreads can counterbalance purely the cost (risk of exchange default)?