BitUSD, Tether and NuBits compared side by side at BitDeposit.org

I just discovered BitDeposit which provides an easy interface to convert Bitcoins to USD pegged crypto. It won’t be hard for consumers visiting the site to pick which of BitUSD, Tether and NuBits is best. 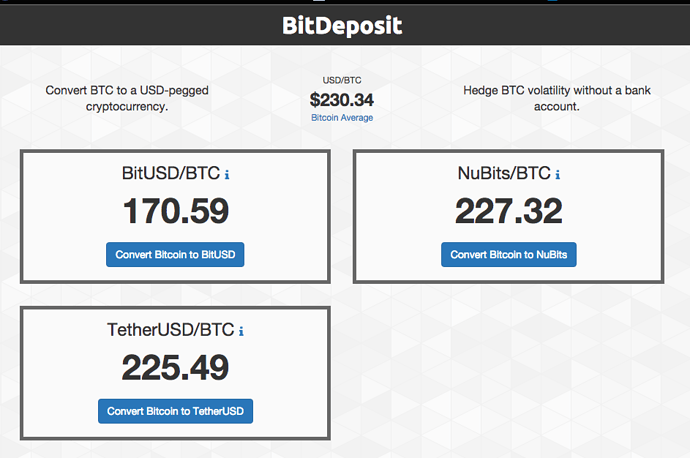 To deposit one’s asset into a secure USD denominated register without a bank account.
That’s what nubits is all about and has demonstrated can do.

excellent site! but this 2$ difference of nubit from USD is due to spread using in exchanges or
due to fees of the site?
bitUSD is far off!

I’m not sure about details about bitUSD’s history as the resolution of the CMC charts is not so good if you try to find out details of a specific weeks some months ago.
The last one and a half weeks it looks horrible for bitUSD.
You can get an overview here. I recommend to follow the posts back to the last days:

What do you think of dollar-pegged crypto currency ? • r/ethereum

I heard of NuBits, which are kinda dollar-pegged bitcoins. And I think a similar project exists for Ethereum, just forgot the name. Do you...

excellent site! but this 2$ difference of nubit from USD is due to spread using in exchanges ordue to fees of the site?

Yeah - good question, we should be closer than that isn’t it?

The $2 difference is the difference between huobi and bitfinex. If you compare the nbt price on that website to the bitfinex price you’ll fine we’re within a fraction of a percent.

BitUSD is so much better than USD. It’s more than 10% better right now.

i am too lazy to read about how bitusd “keeps” its peg. can someone explain it with simple words?

here it is: it doesn’t

I haven’t spent much time with bitUSD, because I don’t like things that are more complex than they should be or need to be to do their job.
Sorry for not being able to explain it…

I might be totally wrong with this, but:
from what I gathered it looks like their concept in the end isn’t very different from Nu’s concept.
Just like NSR back the value of NBT (e.g. by share buy backs in case NBT get sold from Nu to the market), bitUSD is backed by BTS.
From the BitShares wiki:

Initial Creation
BitAssets are created whenever a short is matched with a buyer at a price set by the median price feed which is provided by delegates. This means BitAssets are “lent into existence” by the network, which creates the demand backing the USD to begin with as the short will need to buy back the BitUSD to cover their position and get back a greater value’s worth of collateral.

While bitUSD is quite complex the peg isn’t kept very well - and that seems to have to do mostly with the lack of incentive for liquidity providers to create buy and sell walls with a tight peg:

NSR back the value of NBT (e.g. by share buy backs in case NBT get sold from Nu to the market)

Did not understand very clearly that part –

You need a collateral if you want to back the value of NBT.
Some say Nu is free of collateral, but it isn’t. It’s free of external collateral.

Tether keeps the USD they receive for sold USDT. They hold USD as collateral. That is obviously centralized and in several ways dangerous.

Nu does that differently.
In the beginning Nu’s capabilities have been somewhat limited, but the NSR developers, holders and the Nu community evolved the Nu network formidably.
With 2.0 and NSR grants one can truly say that the NBT value is effectively backed by the value of NSR.

If NBT get sold from the Nu network to the market, share buy backs or dividends incorporate or distribute, respectively, the value of the sold NBT to those with a financial stake in the Nu network: the NSR holders.

A share buy back is expected to increase the price per share leading to a higher market value. The difference between the increased market value and the market value before should ideally be close to the value of the NBT that was meant to be incorporated into Nu.

With distributing dividends the value is leaving the Nu network if you look at it on a blockchain level, but economically it’s still in the Nu network: in the pockets of NSR holders.

If NBT need to be bought back by Nu, because NBT demand on the market is very low, NSR will be issued and sold.
This will have an effect on the NSR price, it will be pushed down.
But NSR holders have been rewarded for that way earlier with share buy backs or with dividends.
They are incentivized to agree with issuing NSR and selling them, because if they don’t, they risk the peg and endanger all their stake in the Nu network.

Is it more clear now?

addendum
if the February exchange hacks wouldn’t have happened, there could have been much more dividend payments.
Back then the NSR grants were not available and it would have seemed a little bit strange to distribute the value of sold NBT as PPC dividend.
But now Nu has NSR grants.
If Nu were to sell 100,000 NBT to satisfy market demand tomorrow, there would be no viable way to keep the collateral for the NBT, but by distributing dividends to NSR holders or by performing NSR buy backs.
Practically the 100,000 NBT would be taken from the funds of the tier 4 sell side custodians. After having sold them, PPC would be distributed to NSR holders or a share buy back would be started (or both; and maybe even BTC dividends if NSR holders vote for developing a client to do that).
The funds of the tier 4 sell side custodians would be equipped with 100,000 NBT granted to them by NSR holders (NBT grants do work with multi signature addresses, right?).

Wow - I took time to wrap my head around this but I ve made an important progress in my vision and understanding of what we are trying to accomplish with Nu - In particular upon this:

You need a collateral if you want to back the value of NBT.

With 2.0 and NSR grants one can truly say that the NBT value is effectively backed by the value of NSR

But now Nu has NSR grants.If Nu were to sell 100,000 NBT to satisfy market demand tomorrow, there would be no viable way to keep the collateral for the NBT, but by distributing dividends to NSR holders or by performing NSR buy backs.

Tether has 6 million usdt trade volume on usdt/usd today. That’s 3x their total circulation. So either someone is rapidly trading hundreds of thousands at a loss (usdt/usd is a pricestable feed) or there’s something very screwy going on.