Hey all,
For the past month I’ve been trying to withdraw my delisted coin from poloniex to my wallet but the transaction never goes through. The transaction status shows “pending” the entire time, i have tried canceling and trying different withdrawal amounts to see if it might work but the issue remains the same. I have contacted the poloniex support twice regarding my issue but they never seem to reply or help me out and its been almost a month. I’m not sure what to do, I got into crypto and Nushares was one of my first investments for long term until I became distracted with my personal life, i had never had the time to keep up with my shares and was not expecting the coin to be delisted. Along with couple of people here that have created a similar discussion of their withdrawal issue from poloniex, can you guys please review and accept printing nushares? 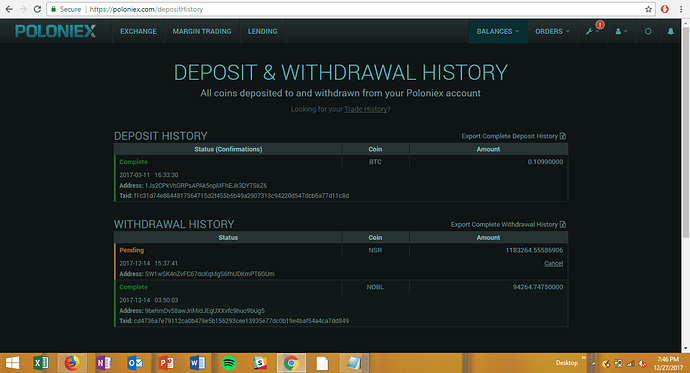 If you guys need any more information or proof, i will provide them.

The community does not seem to care about what happened to us, and I have encountered the same problem,

The community does not seem to care about what happened to us, and I have encountered the same problem,

I’d vote for all of these if you can get Poloniex to communicate with Nu and provably destroy the NSR in their possession and help to coordinate legitimate claims. To say the community doesn’t care is just pouting. This is a Poloniex problem.

If the community is determined to solve this problem, I would like to invalidate poloniex’s address. The community has locked into many NSR addresses. It can also use poloniex and then repackage the new NSR compensation to the losing shareholder

well the problem is poloniex doesn’t ‘‘communicate’’ and we don’t need proof they destroyed the NSR . they can’t sell it anyway . please think about it we are just wasting time

Do we have a list of all Poloniex addresses? I highly doubt it. If we did get that list, the next step would require Poloniex to allow shareholders to input an address that the affected shareholder owns, and it would need to be provided to Nu. Screenshots are not proof of anything. As I’ve said before it will be much less work for Poloniex to fix (update) their wallet than to manually sort out claims. I do feel bad for people who left their NSR on Polo long after NSR was delisted. I withdrew mine when they announced it with no issues.

But poloniex did not give shareholders any response
Now NSR in a rapid rise in the process,
Community development is good
I do not understand why poloniex does not restart NSR transactions
Community Operations team sad nor received poloniex w…

My only suggestion is to keep on Poloniex. There are too many things that will go wrong with relying on jpgs for proof of ownership. I’m really sorry.

wait they allowed you to withdraw ? when and how much ? i tried withdrawing 2 days before it was delisted and it failed
anyway . i will say it again we will not just rely on jpgs . we can show it live by teamviewer

I withdrew as soon as they announced the delisting, iirc. Teamviewer will not solve the problem of the NSR still being spendable. It’s also not reasonable to expect every shareholder who votes to login to your teamviewer to see it for themselves.

well fair enough lissajous has a right point
and we all know that poloniex won’t respond
so… should we start thinking about the first option we have ?
to actually take a legal actions against polo and telling everyone that they scamed us . they are in the USA and since we are a lot of people having the same problem we will be able to restore our coins legally

The law does not help us. The community should make a plan to solve it by itself and vote by everyone.