Twitter Poll: 90% of responding /r/Bitcoin and /r/Cryptocurrency users would be willing to use a decentralized exchange 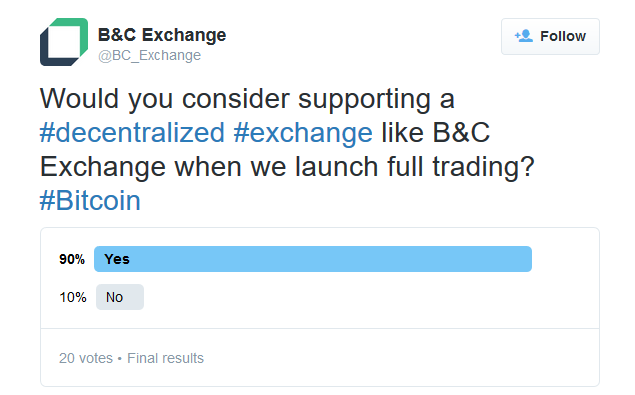 Why would this be downvoted to zero in r/bitcoin? Decentalized exchanges are greatly needed right now. Why would they refuse to acknowledge this? Is it simply because they know we’re offering NuBits as competition for them? A decentralized localbitcoins.com is also mentioned here. Do we know anything about that?

By the way, B&C in combination with Nu would be solving 2 issues:

Just reviving this thread. I doubt anything has changed. There is only one decentralised exchange (Bitsquare) with some decent followers and development. So I believe there is still space for B&C in the market.

@Cybnate @cryptog what is needed to launch a usable version of the project? Do any threads lay out a timeline with specific TODOs?

@cookrn B&C Exchange remains a passion for me. I am confident the core design is viable and can, after an experimental period, provide much better security than the centralized exchanges that define crypto asset trading today.

Active work on the project has been put on hold. The reason is a lack of funding. Both funding and rate of progress were greatly harmed by the unauthorized stress test of Nu that was started in late May by some custodians. The B&C development fund consists mostly of NSR. It has been mostly valued at under $50,000 in recent months. That isn’t enough to make a good attempt at completing B&C Exchange. BlockShare liquidity is too low at this point to fund it with BlockShare sales.

There are two options for resuming development: one is to restore BlockShare liquidity so that BlockShares can be sold to fund development. We are in the process of having BlockShares listed on Cryptopia to this end, although I don’t think this is the most promising of our two options. However, clearly both options should be pursued simultaneously.

The second option is to have NSR rise in value several fold, thereby increasing the value of the development fund to a point where there is good reason to believe completion would be practical. With NuShares up nearly 200% from their low, we are well on our way to this outcome. Further analysis is needed, but I suspect it makes sense to begin development in earnest again once NSR reaches something in the neighborhood of 60 satoshis at current BTC pricing.