This is the exact definition of a scam, I will petition bittrex to delist this coin right away. Where are all the bitcoins of the buyers? how did they exit the system so fast?

Nushares have very few trades, and as time goes by, a lot of money is needed to get back to $ 1. Are there any countermeasures against this? You are a cheater because you have issued a coin from the beginning with a garbage - like plan.
I will strongly protest to remove this coin from bittrex. Do you know how many people lost money because of this damn coin?

What is the Equilibrium Reserve and why is there a $4.606 millions? You have somewhere $4.6 millions and letting NBT to die? That really raises some serious questions.

They are presumably likely to be taking advantage of the rise in bit coin. You have to remove them from the bittrex before more victims can be found.

I say “immediate liquidity” because the deeper liquidity tiers 5 and 6 bring liquidity not immediately accessible.

You can’t demonstrate commitment to the peg, if you are out of BTC.

The only reason we’re not out of the BTC is, because the buyside offset was increased.

Commitment to the peg is using all available resources on it.

In the case of Nu at the time, it was nonsensical to withhold funds from the peg with the goal of defending the peg. Is there any scenario where it does make sense?

Withholding funds from the peg or devaluing the currency by widening its spread will spook customers and make them want to reduce their holdings in the now unpredictably supported currency.

There was no other available resource for peg support than utilising the established Tier 6, i.e. NuShare sales.

What FLOT should have done is begin NuShare sales as soon as park rates were determined insufficient. By selling NuShares before trust in the currency is broken, impact to NSR market cap is minimized (which is not to say made insignificant). The NuShare value would likely have decreased whichever action was taken. Even with the market understanding that NuShares being sold is an intended dynamic for the situation it would possibly be pushed down an uncomfortable degree the first time.

Investors not already heavily invested will likely withdraw support from a company that abandons its product, in Nu’s case the peg.

It’s possible @JordanLee’s motion to fire incompetent liquidity providers triggered the bank run with controversy (though the peg was already shaky days before). It’s possible he sold private NuBits and broke the peg at that point. None of that is a cause to condemn @JordanLee. The deeper issue here is what the motion made apparent, that liquidity wasn’t being provided at the tight spread customers had been promised.

Go back and read the motion. It makes perfect sense and isn’t at all as negative as I initially perceived it.

FLOT failed to acquire sufficient BTC to support the buy side. The group had never dealt with this situation before and lacked understanding of important dynamics involved. That led to widening of spreads and withholding of funds to desperately try slow down exiting customers.

A fear of utilising Tier 6 led to depleted Tier 1–4 and the broken peg.

What I don’t understand is why don’t you sell as many Nushares as necessary to refill the buy side as fast as possible? What is the problem?

According to this link I have to wait 17 days to see enough Nubits be put on the buy sider in order for me to be able to sell my Nubits??? Please sell Nushares as you say the network should do! START NOW MAN! 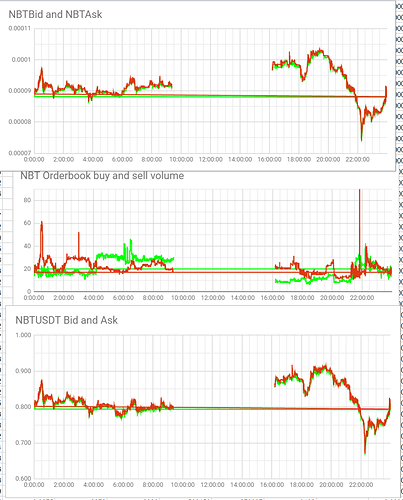