Okay, so I’m sorry my first one is such a negative post…
but I would really like to know whether Nubits is heading to zero worth,
or whether investors still expect a swift recovery.

I know the whole market is unstable,
but Nubits managed to remain stable until 19th March
and since then they have lost more than 50% of their value.

I realise you can’t predict the future…
but would someone please explain (preferably in non technical terms)
what is going on ??? 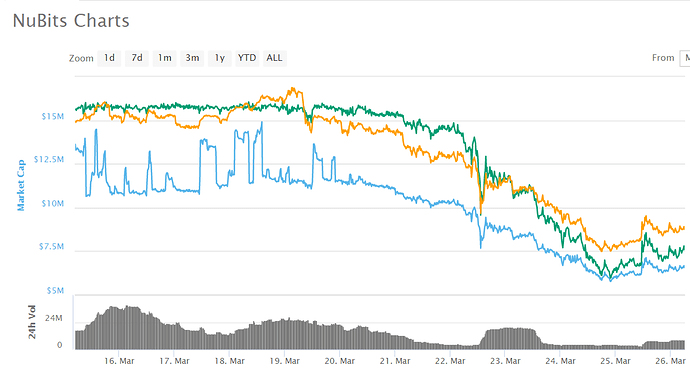 Hi Cryptobird ,
I m new like you here, and i asked the same question.

All the answers are in this post : Statement on Status of NuBits and Liquidity 2018–03

Short Answer : Maintaining the peg to 1$ is done with sell wall and buy wall betwen 0.95$ and 1.05$.
They can do that because investors invest money in NUShare (another crypto) which went down a lot recently .
So they can’t maintain the walls for now and are looking for investor in NuShare

but would someone please explain (preferably in non technical terms)

Nu has run out of reserves to support the peg, and the market doesn’t have an appetite to support it.

So, Nu has failed for the second time.

The first time, was likely down to poor choices by a team of people charged with handling liquidity operations, who devalued NBT while there was still a fair amount of scope to sell NSR to support the peg. It’s not certain that a different course of action would have prevented that failure, but it would have at least delayed it & fully stress tested the system.

Despite the failure last time, the system’s other weaknesses have not been tackled.

This time, he mistake was not reforming Nu & strengthening it during good times.

Huge resources were available during the 2017 boom, but reserves were kept far too low, no initiatives were put in place to ensure ongoing demand for NBT / NSR when the good times ended, and Phoenix was paid huge amounts of money (recently seeking $285 per hour, plus bonuses), some of which were justified for recovering from the previous crisis, but in my view too steep considering the lack of further reform and vision.

The dependence on NBT parking is not a good place to be due to the small audience who might take advantage of it, and the huge issue that it’s trying to prop up demand in a way that increases supply in the medium term, adding to future downward price pressure.

A big problem is that NSR was de-listed from exchanges with good volume, which has crippled Nu to a large degree because it relies on NSR sales to hold the peg. If there’s no big market and audience for NSR, Nu is greatly disadvantaged. Hence Jooize’s recent posts saying that getting NSR listed on high volume exchanges is a top priority, which it should be, but the recent crisis may make getting listed difficult.

I can’t predict the future, but last time this happened, Nu did recover.

I hope that it does again, and that once stabilised, some serious thinking is put into strengthening the model beyond just getting NSR listed on exchanges.

Nu’s stability mechanism is a working platform that could enable some great things, if the model ensured ongoing demand for NBT and NSR, as well as being profitable in the good times and the bad.

a team of people

Rags-to-riches stories are very important, both BTC and ETH benefit from it, we’d better make “share” fixed quantity and price ever increasing.

Plan B for Nu--the Nobel Prize Winner's model The Plaza

The reason I write the post is because I’m B&C shareholders and hope Nu becomes successful so that B&C can be finished in future, and also want to summarize my thought on stable private currency in these years. A strong system demands less on the quality of its participants and a weak system demands highly on its operators. If Nu’s architect want same achievement as Satoshi’s bitcoin project, just imagine that the founder disappeared several years after the project’s launch, and the system stil…

If Nu’s “liquidity engine” becomes successful in future, we all be happy, but if it doesn’t, this Plan B is just for us to continue our effort. As per Nu’s liquidity engine, we sell NSR when NBT peg in danger and buy NSR when our reserve is high enough, the main purpose is to treat NSR market cap as a pool as we can input or output value when needed. The short coming of liquidity engine are:

1 We have to build up a high liquidity market for NSR which is unnecessary while NBT’s liquidity is the only target.
2 low value transfer efficiency due to price gap between buyback and sale of NSR.
3 An infinite supply of NSR(at least looks like) will terrify&prevent potential investors(speculators) from buying NSR, therefore the liquidity engine may be out of fuel.

The Plan B is from the Nobel Prize winner’s short term lending mechanism which is immune to the flaw described above.