What you aren’t realizing is that I’ve been running the only pool with a maximum offset less than %0.5. I can run my tllp bot on all your pools with a %0.5 offset. The biggest thing this motion is saying is that we should encourage our users to fairly explore the parameter space. This motion also gives guidelines for what that parameter space is.

You think you’re running a %0.2 offset pool because your providers are not savvy enough to change the parameters in their own trading.py files. But one day they will, and you’ll notice that your walls are not at a tight spread anymore. If you don’t like the numbers in this proposal, state some numbers you think are more fair. However, no one has really tested a %0.2 offset server side but me, the tight spread we have on pools now is just because of the tech ignorance of our providers.

Yes, that is what I believe I said.

I do not like a mandatory offset on top of the exchange fee on the NBT/fiat pairs.

However, no one has really tested a %0.2 offset server side but me, the tight spread we have on pools now is just because of the tech ignorance of our providers.

I’ve tested a 0.2% offset for the exchange fees since the start. And practically that has been in place all the time as far as I’ve noticed. I have not been aware that it is possible for the LPC to change that single-handedly and if true I will try to have that changed and make it either impossible or reduce the interest rate.

TL’DR Offset should be zero (after exchange rates). Higher offsets will be compensated less by Shareholders. In my opinion that should be the standard and every pool operator should take that into account.

Offset should be zero (after exchange rates)

What tolerance does that correspond to? There are at least practical minimums for these things. If you look between exchanges, you will have a hard time actually coming up with a picture of the price of btc within %0.4 (your ideal total spread). What does that mean for the hyper low fees of exchanges like CCEDK?

I was never told what tolerance to run. I run 0.0085 on my btc pool, because that’s what Creon ran. This motion is the only motion that actually specified a contract to me about what offset to have. Again, every single tllp except my cny pool allows a %0.5 offset, so either we’re all breaking contract or that particular contract doesn’t exist.

it is possible for the LPC to change that single-handedly

Change the ‘spread’ variable on line 207 of trading.py in your master directory from github to read ‘0.004’ and it will still run perfectly well on all your pools.

Here and there I see some detailed issues but ultimately the culprit is a fundamental disagreement on whether we want larger spread values. Fine, I will redo another draft to reduce the scope of the motion, so at least there’s something put forward. Next time I will try to reduce the motion to some bare minimums like disclosure of offsets and default settings. Hopefully shareholders can agree on this.

At this point I just hope objections could be raised earlier and more explicitly, and people could at least try to get a lesson out of the discussion. Perhaps I could have tried to assume from other threads that some people really didn’t like larger spreads, and all the discussion didn’t change that, so I won’t say that was the most disappointing part, and so far I can agree to disagree.

But this is something that I really don’t like. In recent custodian grant proposals none of the pool operators except @nagalim chose to at least disclose anything related to the intended spread values in recent custodial grant requests. I don’t mean to make this any kind of a power struggle, which could come at the cost of the Nu network, but I want shareholders to be aware of their rights: if you agree in part to the spirit of this motion, on any one of the following:

then it may be in your interests to withhold voting for individual LPC custodial grant requests until some of that is addressed explicitly in the proposal.

bleeding its life away holding a vanity zero-spread-after-fee.

I cannot agree more.
Once BTC goes up again, which is the case right now, traders have no problem selling their NBT for BTC immediately since they can do it almost for free besides the exchange fee.
Right now, Nu has no adoption besides being used as a way to hedge against BTC volatility by traders.
So we should make those traders pay for that hedge.
In traditional finance, traders buy derivatives to hedge.
NBT could be regarded as a very simple, efficient, derivative.
Therefore hedging using NBT should be priced via a larger buy/sell spread or offset.

Also, I do not think I would have the time to modify the tolerance/offset/spread parameters in the corresponding files.

addition of an offset parameter to TLLP’s bot config file 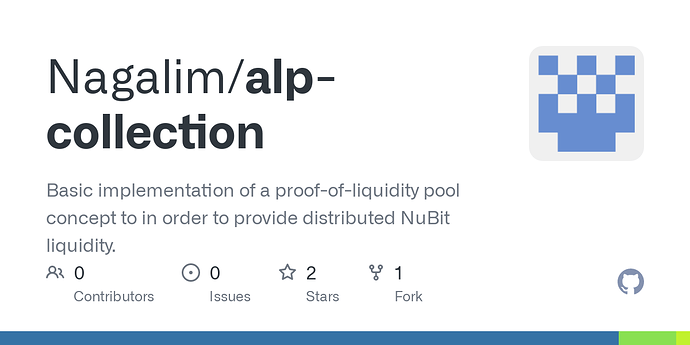 Put ‘offset=’ then whatever you want in the pool.conf file. Also, ‘deviation=’. If you take a look at pool-bter-cny.conf, you’ll see an example of how I use it (it doesn’t open properly in windows’ notepad program, use anything else).

I agree too, it is no long term solution. However without demand we will bleed anyway. So some investment is required at this time. Keeping a low spread is one way to ‘advertise’ the coin. There is a cost to advertising though. One can argue what Nu can bear and for how long.

Keeping a low spread is one way to ‘advertise’ the coin.

Nice. Tks. I ll give it a try.
But this parameter only works with your fork of ttlp, right?

What is the impact of that ad campaign?

Like the question, but don’t have a great answer. Obviously not good enough, but do we have anything better to increase demand? Just launched NuDroid, hope that everyone buys a lot of NuBits soon…

My fork is a pull of cybnate’s main repository, then changed in ways that shouldn’t affect the running of other pools (with or without specifying the new parameters).

Personally, I only want NBT for 3 things:

We should get some vendors.

The impact is that we have outperformed almost every competitor that was released after Nu. From a previous post:

It’s important to note that Nu is still outperforming almost every competitor that was released after us. Of the 21 projects ahead of NuShares in market cap today, only two were released after Nu: Banxshares (which only released 37% of shares to the public, and are only traded on an internal exchange that self-reports numbers), and PayCoin (which is an outright scam).

NuShares have never traded in a bull market in its entire history. It’s tough to be critical of the performance of NuShares when by all accounts it has out-paced the market. Peercoin has dropped 90% from last summer for example. The past year and a half has seen a severe contraction in enthusiasm for cryptocurrencies from the heights of January 2014. As long as we’re improving our products (NuBits) though, I’m optimistic that enthusiasm will begin to grow once more and the price of NSR will reflect that.

It seems this motion has become fixed at 35%. That means that at least a third of shareholders think that at the very least think there should be some kind of motion setting out to place minimums and define quality of liquidity. Perhaps someone can propose another motion of similar wording with a tighter peg and if both motions pass the looser peg takes precedence (because it’s easier to enforce)?

We can push out the disclosure requirements first for gran proposals, as that seems non-controversial. A template on minimum offset for each trading pair can be made and voted on independently (and also revoked / updated independently if needed), as putting too much into one single motion can be confusing and hard to rally for.

This motion is a no brainer. With a wider spread, we’ll get endless liquidity from arbitrage since there will be a guaranteed way to profit off price bouncing back and forth between walls. We will guide the price and traders will compete for the better spread. Nothing else exists like this in the crypto space. This is also the most likely way to see additional pools develop out of competition.

This touches on my biggest gripe with the original design of Nu. Why create this beautifully constructed piece of financial software to help bring freedom, stability, flexibility, and transparency to an economy and not let the free market decide peg spread? Makes no sense to me.

This is also the most likely way to see additional pools develop out of competition.

I think i cannot agree more.
I think most shareholders fear that allowing for a free to adjust spread would harm the peg.
Well it would depend on the market’s behavior. If most traders make transactions involving a higher spread, then it would get the peg to move away from 1 usd.
If on the contrary, those transactions involve a lower spread, then it would keep the peg close to 1 usd.
But it is safe to say that those traders would choose a lower spread in most cases.

This is only my understanding of course.

Well it would depend on the market’s behavior.

There’s a simple tool to tell us how it needs to be changed. Plot an ATR (average true range) on a five minute chart of bitcoin. If the ATR reading is below 1, we should use the tightest spreads. If it’s above 4, we should be using the widest spreads.

Yes this is the idea, i feel.
Perhaps it is linked to the idea of market-aware liquidity distribution of NuBot by @desrever
in there.