[Passed] A grant to make NuBot work with Liquidity Pools

Let’s see if our bot is awake at this time of the weekend :

let me see the trend …

Weren’t we going to change the code for this so sharedays don’t matter? Can that be part of Nu 2.1? @JordanLee

I want to thank all shareholders for the trust put in this project. Will start working on it tomorrow and try to keep you posted with weekly updates.

Also, as part of the grant I transferred the additional funds to the multisig address, so now they are out of my control and in the hands of @masterOfDisaster @erasmospunk and @woolly_sammoth

This week I started designing the integration strategy and closed some old open issues. In the meantime @woolly_sammoth managed to deploy a new version of the ALP server online for testing.

I added four configuration parameters to NuBot that should be sufficient to configure NuBot in pool-mode :

I also implemented the logic to validate the compliance with other parameters (liquidity submission among others) and integrated new options in the frontend and updated the documentation and setup guide with instructions.

Next iteration : now that I have a live server to tinker with I’ll start integrate the logic of the pool registration process. However there is an unforeseen contingency next week which will force me to stay away from computers for 5 days or so… Will likely resume works next weekend.

After a forced break, I am resuming development today. Thank you for the patience

In the last week I have been (mainly) working to get ALP-NuBot interface communication, which resulted in a java ALP client to access ALP server methods documented here . To play around with the Java client see example usage in TestALP.java

Documentation and setup tutorial are also refined, along with several other improvements and bugfixes.

We will start testing the integration as soon as we have a live exchange on ALPv2 test server, likely in the next couple of days.

: ALP user stats, ALP separate logs, new CredentialManager architecture for ALP users, cryptsy and southxchange wrappers and other minor and major open issues I plan to pack within the budget into 0.4.1 if possible.

Progress has been made in improving the ALP/NuBot interface and the integration of the pool client into nubot.

A major issue that is almost ready to ship is the implementation of a separate thread that collects statistics from the ALP server and displays them into NuBot, both via CLI and UI .

Both the backend and the frontend are ready for live testing : 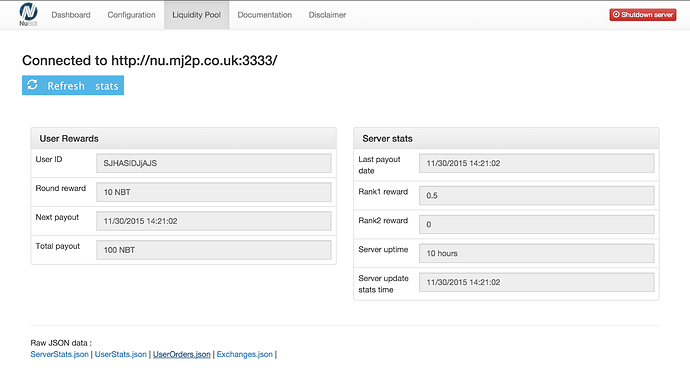 Next in the pipeline we have southxchange wrappers, orderbook visualization in the webinterface, other major an minor issue …

Looking good, next week, after live testing, I will be able to provide a reliable completion date.

Integration of NuBot and ALPs is really exciting. Everything I’ve seen so far is very professional looking. I wonder how this will change things for our liquidity providers.

The GUI really makes me want to collect fund and restart my liquidity operations.

From my understanding, right now NuBot is almost not used in liquidity operations.
That is a pity since it seems that it is a beautifully crafted piece of software, sophisticated that can be so useful in reducing the costs of liquidity provision from Nu’s perspective.
And its development costs money.
The good news is that that is gonna be changed very soon with the integration to ALP.
I expect NuBot to be the major bot used for liquidity operations.
Is my understanding correct?

By the way, once NuBot is adapted to ALP, I suppose I will be able to use NuBot’s GUI as a pool participant.
Is that correct?

right now NuBot is almost not used in liquidity operations.

it is being used on poloniex and hitbtc by NuLagoon, as entry and exit gateway by @masterOfDisaster afaik.