I encourage you to keep some more funds on your NuBot account.
I don’t know how the other FLOT members see that, but I’d rather have some more buffer in this last line of peg defence at Poloniex.

The motion on which this operation is based on doesn’t deal with thresholds at which you withdraw funds.

I recommend to try having approximately $10,000 on buy side and sell side at average, but leave it up to the FLOT to decide what they consider wise.

Remark: when I ran the previous NuBot operation at Poloniex there were up to $50,000 in total for an extended time in the accounts on which I ran the two NuBots. While that was quite high and due to the very bad experience with ALP, I consider in total below $20,000 insufficient.
Waiting until the FLOT requests withdrawal might be an option. I think a “forum consensus” could be sufficient for that.
Comments are welcome.

My contract has me send back half of each side once a week, at my discretion.

I think I’m in the condition to ramp up my NuBot operation from “active standby” to “active”, soon.

My current NuBot motion at Poloniex was rather meant for emergencies and to provide incentives to create additional operations (due to the high fees which kick in with delay).
So I consider applying for a new operation with moderate fees to replace that emergency version.

Based on the current motion a second NuBot operation is available basically for free for the first 45 days.
As soon as I feel comfortable operating a NuBot again, the account can be funded while the motion for a regular NuBot operation is still running.

I’m going to prepare another BTC deposit by FLOT.
The strange thing is that the ALP doesn’t show recent “outages”: 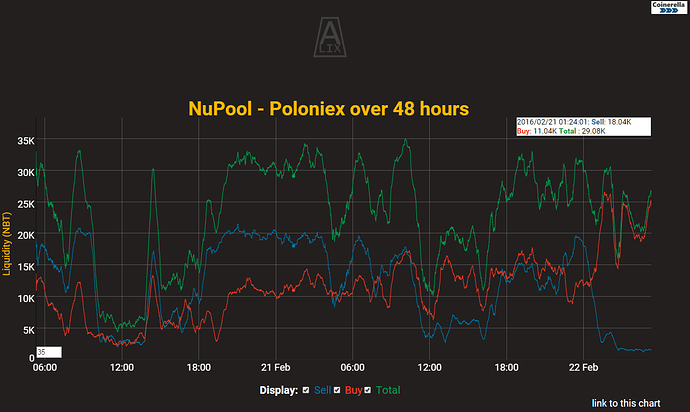 How can NuBot orders at 1% offset be traded under these circumstance? Recently there have been over $4,000 in the NuBot account after the last deposit by FLOT.

I know, it is strange! But now the situation is changed. We don’t have sell side, only nubot has 10K NBT there.
Moreover the ALPs can reach 1% offset as well. Sometimes nubot’s orders are below ALP and sometimes are above!

Moreover the ALPs can reach 1% offset as well.

And I think that should change soon or the rates needs to be adjusted significantly. With over 1% offset you can earn money with the volumes on Poloniex. And you can earn even more when BTC goes up. We are paying too much for the liquidity at Poloniex and we are not getting the walls when we need them. Good to have the NuBots! Although a topup might be needed.

And don’t forget the famous pybot bug, placing orders of 0.5 NBT (in both sides) when recalculates new prices!

It will adjust, give it some time.

Ok, it didn’t fast enough. Gave it a kick and tweaked some parameters. Might create a hard reset of the bots with some clever batching to circumvent this problems the soft reset doesn’t always work. See if I can get Linux or some tool to set jobs on a timer…

Edit; Made something quickly, will have this experimental script running resetting Pybot every 15 minutes for a while. That will solve the problem.

I’m going to prepare another BTC deposit by FLOT.

The deposit arrived and was credited. Funds are on order:

Used yours for this, but I believe it came with newly introduced bugs. The NBT/USD pair really misbehaves with your repo for some reason, so I’m running bots from two different repos at times. They both work with the script below.

For anyone interested in the bash script I’m using to restart the bot;

I’m sure this can be done better and smarter, but it may help someone. 900s stand for a reset every 15 minutes. The counter is on 50,000 just because I don’t like infinite loops

This is not a solution, just removing symptoms.