@Cybnate, may I ask you for your opinion on this? What do you believe happened when @jooize failed to compare two exchange prices as Vice Chief of Liquidity Operations on behalf of the Nu network. Could you please be so kind and tell me what comes to your mind when you hear about such behavior?

Off-topic: WoollySammoth has been answering that in another thread about park rates. My view is similar and I was disappointed when I read about that event. Room for improvement and further automation is the answer eventually.

Nu was never meant to have a central point of failure, ruined by people who were elected to have total control over the money supply.

That’s how the project started when the incorporators and “seed investors” kind of elected JordanLee.
It continued when book-keeping was done that wasn’t available to share holders and only for JordanLee. Correct me if I’m wrong.
For a period of time it was better when FLOT was in place. The control was shared and the financial reporting the best Nu had.
Then FLOT was slaughtered to centralize control again. The reasoning was far-fetched, but it did its job.
Now the total control is in the hands of those who control the network and can set fees to zero without the help of anyone.

My short-term loan design is there. It solves the decentralized issue and profit problem.

But seldom of you on this forum accept it. So I am just waiting for Nu’s failure, without anything can do.

Now the total control is in the hands of those who control the network and can set fees to zero without the help of anyone.

Could you please tell who control Nu project, ie money

, and who maintain & develop it now?

As far as I can get from the 1st glance @jooize & @woolly_sammoth are ones from those people?

But what about the developer(s)? Is the project’s developments frozen as well as B&C Exchange?

Pity to see the latter abandoned, amid the rise of DEX’ ICOs

,
wonder if the B&C could compete with those new projects.

B&C is frozen, as its funding has dwindled extremely low due to poor investment choices. As far as I can tell, @sigmike is the only active Nu dev. I also believe @Cybnate is a forum owner along with @woolly_sammoth. Augeas is a fork of B&C led by @woodstockmerkle, but development has been slow and the project is still seeking a clear purpose (as well as lacking any real funding).

It is unlikely we will see substantial core protocol advancements in Peershares anytime soon. Most Nu dev work seems to be aimed at stabilizing the most recent series of forks done to recover stolen funds as well as off-chain developments aimed at automating some of the vast amount of accounting work being done by @jooize.

Note that I am not privy to any private Nu info not available on the forum.

You’re pretty much bang on.
@jooize controls the available funds at addresses listed here Supply, Reserves, and Equilibrium and also runs the NuBot instance on Bittrex. He also undertakes the daily currency sales or buybacks that take place depending on the equilibrium of the network.
I run the NuBot instance on Cryptopia, under instruction from @jooize, and look after NuBot development, which recently was adding capabilities for the new Nu currencies designed to be pegged to currencies other than USD.
I also recently took over the running of the forum software and I am an admin here along with @Cybnate
My other focus as @Nagalim said is in developing some tools to try and automate some of the repetitive network tasks and to allow fuller reporting on the activities that are taking place. I’m also working on some basic infrastructure which I’m hoping can form the basis of some Nu based products and services intended to raise funds outside of selling NuBits. Progress is being made but, as mentioned in a different thread, it is slow due to other commitments away from Nu.
@sigmike is the main developer of the client software and works on a contractual basis as development is required. Sigmike would also take on development work of B&C once that begins.

As for private information outside this forum, there isn’t much going on. There’s some Nu based rooms over on gitter (https://gitter.im/NuNetwork/Nu) which most active members can be contacted on. We use some private channels there for things like instructing fund movement between exchanges and discussing the forum maintenance.
Beyond that there are some ideas being discussed at Flow (a project management software product). Those are things like ‘Improve nubits.com website’ and ‘re-enable liquidity pools’. Long term goals for the network, as well as lists of exchanges that could be contacted and ideas for charts to display network data. (i’m not sure on how public the data at flow is currently. I could investigate if it can be exported in some way to give a view on the ideas that are there, if it’s thought useful?)
The plans for the nubits.com website include many more visuals to display the network health. There is also an effort to try to transition away from one or two people being ‘in charge’ and back to the original vision of Nu as a shareholder led and run community, something that’s only possible because the peg has been restored and some confidence is starting to return.
I’m sure other forum members will chime in here with reasons why the above isn’t possible or with different view points but you’ll see from elsewhere on the forum that this conversation has been taking place for some time. I’m not trying to pretend that the network is perfect (it’s in pretty dire shape) but I’m of the opinion that with a bit of work and guidance, it can at least regain the vision with which it was started. I intend to continue the work to make that happen.

@Cybnate is a forum owner

Owner is a big word, forum admin I would say. And I’m looking after some nodes and NuDroid wallet infrastructure.
I consider Nu pretty much experimental still. We had a few nasty events, but the good part it is still here.
Just to complete the picture.

When Nu succeeds, investments into B&C might flow again. It is pretty much frozen now, just basic maintenance of blockchain.

Anyone know what is up with the Nubits $438,211 24hr volume? When the market cap is only $198,293? Can somebody increase the market cap to the actual one or can someone explain to me why the entire Nubits circulating supply is transferred two times in a 24 hour period? Thanks. 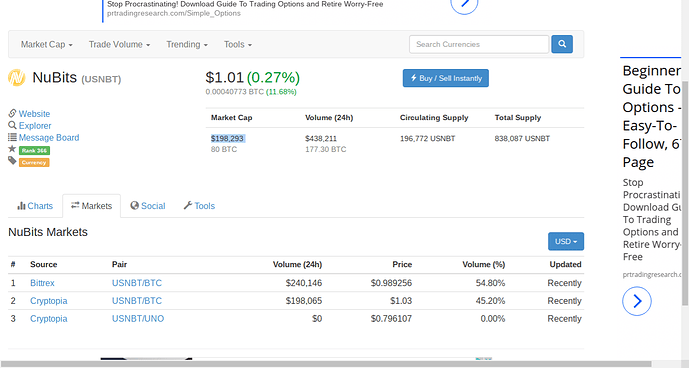 Have you seen the markets going down 25% and now going up again. NuBits is used for hedging mainly by day traders so I’m not surprised when volatility is high volumes of NuBits skyrocket. Look at what happened with Tether. Both are doing what it is supposed to do.
I believe @jooize made some comments earlier that the cap on CMC is incorrect despite providing the right information to them. Not sure what the latest correct cap is. The blockexplorer doesn’t tell us anything about the circulating supply, it is one of those things which will likely show up on the dashboards which are under development.

existing is different from circulating it seems.
there seems to be rather 340k circulating.

[quote=“Cybnate, post:25, topic:5255”]
Have you seen the markets going down 25% and now going up again. NuBits is used for hedging mainly by day traders so I’m not surprised when volatility is high volumes of NuBits skyrocket. [/quote]

I’d be interested in the NAV of the trading at Bittrex and Cryptopia.
Can that be provided for the last days and the next few days?

Look at what happened with Tether. Both are doing what it is supposed to do.

Tether pegs only USDT/USD and is at no risk of being used as BTC hedge.
The main volume is in pairs, which are not pegged by Tether.
If Tether is clever enough, it can make real money each trade in the non-USDT/USD pairs.

Does that remind you of something?
Ever heard that before?

Just my opinion but I think that the leadership should update the CMC circulating supply, that way we have a higher market cap and thus more views from CMC viewers, it is like rank 600 or 700 in the USA according to alexa.com, that provides huge opportunity to Nu.

Just my opinion, but I think that the leadership should improve the reporting/accounting.
It’s clear why liquidity operations reports are limited to posts like this:

It can be sold as positive sign for Nu’s situation to people.
Would the NAV of the trading in BTC/NBT show that Nu loses lots of money there, people would ask how to pay for that.

We know that answer already: sell more NSR or NBT.

I am currently working on a rolling daily NAV report based on activity at Cryptopia. Once it’s ready I’ll post it here and refine itbased on comments. Once it’;s in a form that;s agreeable to a majority, I’ll apply the same code to activity at Bittrex.

My short-term loan design is there. It solves the decentralized issue and profit problem

Have you / can you start a thread detailing this concept and outlining how it might work?

Finding a source of profit is important for Nu, and I feel lending is likely to be central to that (though I think I have a different vision to you, as it is not only for short term lending).

I’d like to see various profit models set out and discussed so that Nu can adopt these if it looks feasible.

I suggestion is here:

Plan B for Nu--the Nobel Prize Winner's model The Plaza

The reason I write the post is because I'm B&C shareholders and hope Nu becomes successful so that B&C can be finished in future, and also want to summarize my thought on stable private currency in these years. A strong system demands less on the quality of its participants and a weak system demands highly on its operators. If Nu's architect want same achievement as Satoshi's bitcoin project, just imagine that the founder disappeared several years after the project's launch, and the system sti…