So at least it is included in https://raw.coinerella.com/?liquidity .

Which unfortunately is useless for evaluating the liquidity situation on Poloniex.

Also, that means some of the orders put by nubot (at least in your case) are still not broadcast as T1 because you chose to broadcast some of it as T2

Current NuBot configuration puts several orders on the book (if sufficient funds are on the account).
Parametric order book could be enabled again. Settings are

Any idea what to do? 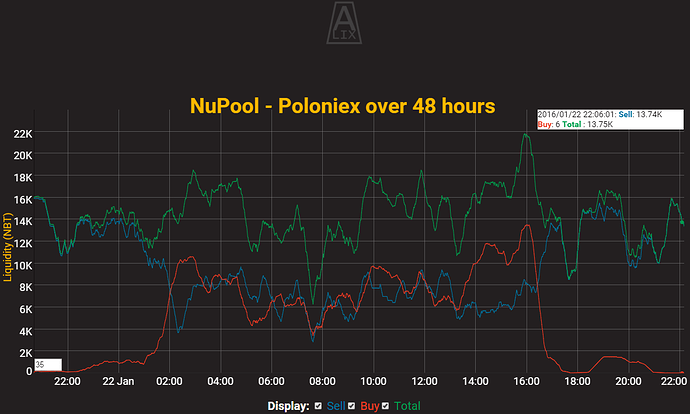 @henry if FLOT balances the Tube, will that trickle down to polo?

@woolly_sammoth what is the eta on getting at least fixed cost on poloniex? 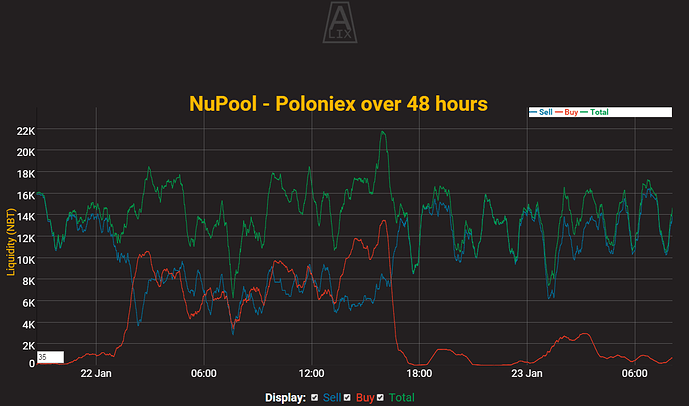 NuLagoon is broadcasting 33k buy 52k sell. Perhaps FLOT can buy 9000 NBT from it, remembering that the spread is going to be refunded eventually.

It would be great if NuLagoon (MLP!), would start to manage some liquidity related tasks like supporting T1 on Poloniex. They get paid for it. I don’t. Sorry - no resilience left.

I appreciate the offer and would take it, except that NuLagoon just offered to bring the liquidity to Poloniex, and that process is much simpler and doesn't require collateral. Perhaps another time. Sorry for the change.

They get paid for it. I don’t.

edit: i tried to put some buy wall in 1% spread in my ALP bot. But it was gone in seconds.
The only wall right now is MoD’s gateway which has a much higher spread not even shown in ALIX.
ALPs cannot help in Polo this time

That makes my NuBots the sole defender of the peg

…no gateway any longer - dual side!

Yeah, liquidity tends to be gone in a split second when there’s a sudden dip, which I figure is a bot nibbling on arbitrage opportunities.

In a more ideal world we should let Poloniex walls have high spread and let the traders trade with each other in between, but I don’t like the fact that BTC volatility is translated into NBT volatility on CMC in times like that.

If that can be avoided then it will definitely be good to have high spreads. We’ll need to expand fiat pools, and shift NBT/BTC to off-exchange places where the volatility can’t be gamed so much.

The spread already is at least 2% (each side offset 1%), with parametric order book.

How does that fit into your bigger picture (which looks good!):

If you leave out the ALP part, it’s already a subset of it, right?

With only 25% of liquidity on the buy side, I am activating as a back up to FLOT operations.

Didn’t @henry create some NuLagoon Tube pairs for FLOT? If so, couldn’t I send BTC to the BTC address and have NBT transferred to FLOT? Are the address pairs documented somewhere?

@zoro and other Poloniex liquidity providers: I can buy NBT for 1.005 with BTC. Just post here or PM me to arrange a trade.

I sent you a pm to buy some BTC.
Although i am afraid that they will vanish even at ALP’s highest spread!

13 BTC was sent to @masterOfDisaster’s gateway twice for a total of 26 BTC. 12.9038 BTC was exchanged fro 5000 NBT. When all these transactions confirm, the Poloniex walls should be balanced.

As mentioned above, I would still like to get details on FLOT addresses set up on Tube, if anyone has the info.

You are aware that they aren’t gateways any more? They are supporting the peg even better.
There are currently 70 BTC buy side support at 1% offset, not being displayed by ALix, but being broadcast:

If BTC drops, it’s rather for the sell side I fear.
If ALP pull the funds from the sell side like they did from the buy side, the NuBots will only have 10,000 NBT in total.
I hope the offset of 1% helps in that direction as well.

We will manually register FLOT’s address pair to NuLagoon Tube:

There are currently 70 BTC buy side support at 1% offset, not being displayed by ALix, but being broadcast:

In order to make this liquidity visible we are going to need an ALix site showing T1+T2 from the various Nubots. In that way it would be easier for FLOT and operators to check the Nubots’ “secret” liquidity that T1 ALix cannot report.

The NuBots did some trades. Resulting balances:

The peg is still ok: 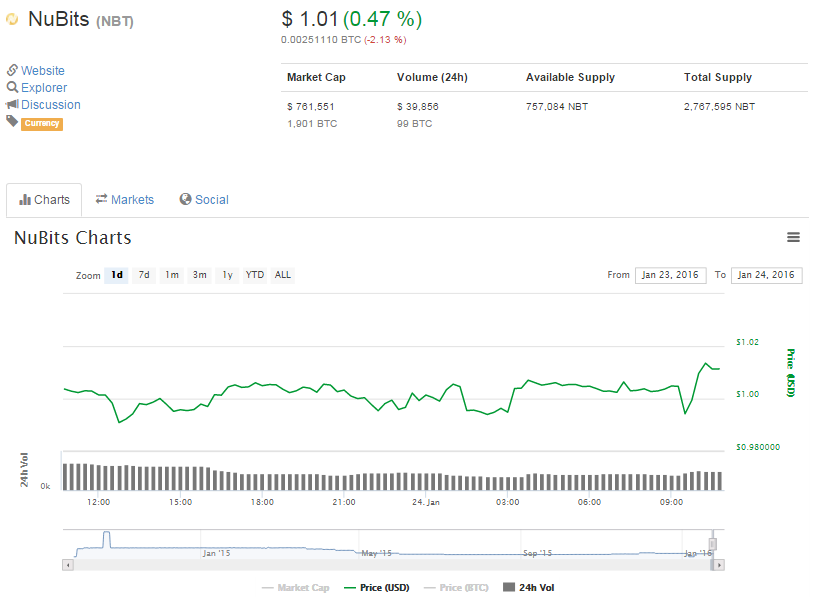 Poloniex ALP with above 0 funds, but low sell side 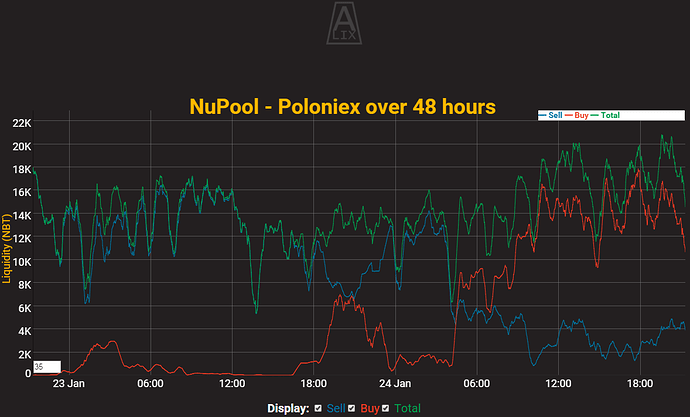 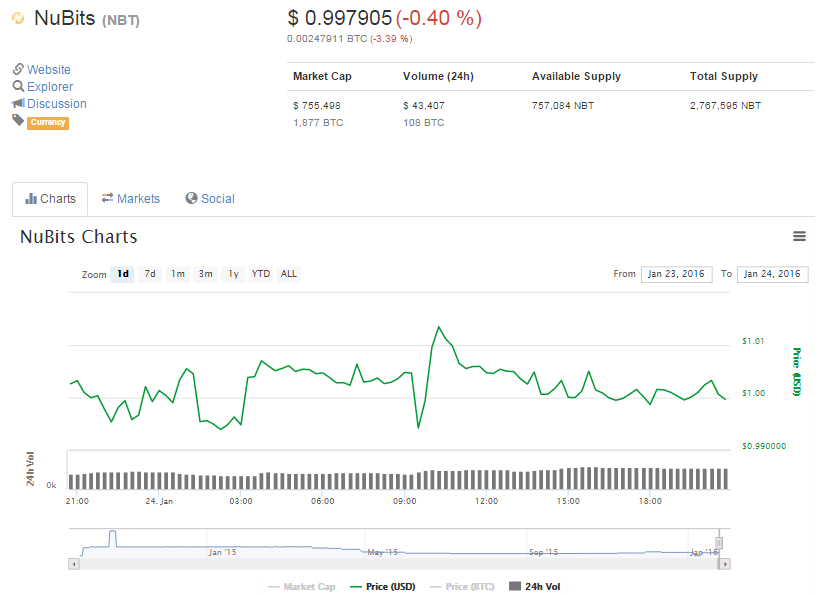 Do you recognize how smooth liquidity provision has become?
The recent daily trading volume was still tens of thousands of USD daily, of which over 80% was on Poloniex.
The ALP was rarely zero, but some thousand USD value were still traded by the NuBots.

Now you might to glimpse how hard I had to fight to keep the peg - with almost no ALP support and a trading volume of up to $200,000 daily.
Back then we already had NuBots with market aware offsets, albeit in a manual way.

With CRFC to create T1.1 and NuBots on T1.2 and T2 the peg is safer than it is without it.
Market aware dynamic offsets might make that even more effective and at the same time cheaper.
It already works with static offset and some ALP (I haven’t touched the config of the NuBots for 2 days now).

Or do you remember the last emergency call to FLOT to deposit funds at the NuBot accounts?

Please read and discuss this

Parts of it might be more controversial than others.
The part that deals with providing liquidity with a combination of ALP on T1.1 and NuBots on T1.2/T2 might be able to find consensus.