I will make the transaction with Jordan or FLOT?
I have some NBT ready

Well, we aren’t under 40% anymore (btc price is doing crazy things). We need a system for this, maybe FLOT can make a private message with @zoro and do at least a test transaction if not actually bring a couple thousand USD to market?

buy side in polo is very thin. FLOT can PM me to arrange a transaction to fix that

About 13000 NBT worth of BTC will be needed to balance the liquidity. Will you be able to buy about 36 BTC?

I know polo is important. But is FLOT to react to individual exchange’s liquidity condition? https://alix.coinerella.com/walls/ shows that overall ask:bid is 54.69%: 45.31%

I think we should be proactive than to run the last minute.

It’s a tough call; Poloniex isn’t just important, but the only exchange that really matters, and USDT is always waiting to eat away our market share. The pairs in other exchanges don’t function most of the time.

If we have a mostly reliable tier 3 there would be fewer worries. A mostly automatic tier 3 pool is pretty much in reaching distance so it is important to get down and implement it.

I haven’t updated my interpretation of the tiered liquidity model for a while and I think it’s more helpful if the community and NSR holders evolve that idea if they think it’s worthwhile.
Want to have a look at it?

i agree with the tier flow but until we reach a concensus, T1 and T4 should interact to keep the peg, consider it as an “emergency measure”. clock is ticking

alix.coinerella.com
shows the opposite!
what to trust?

well, my BTC wall in polo has reached the 2.4 BTC.
I have a lot of NBT for exchange to balance the buy wall

The FLOT can do this now. Somebody forge a txn with henry or zoro and the multisig account.

No need to panic.

With increased BTC volatility, the NBT/BTC orders will sometimes lag behind the changed BTC/USD price. And depending on the price feeds that are used, there will be some difference added to it.
But if you sell side prices below $1, you know that the wall shift is upcoming.
The spread between $0.9995 and $0.9891 is ok (roughly 1%).
There several were seconds between the screenshots I took. This adds some uncertainty as well.

The overall buy and sell sides are not very imbalanced - it’s just the walls on Poloniex that are quite imbalanced: 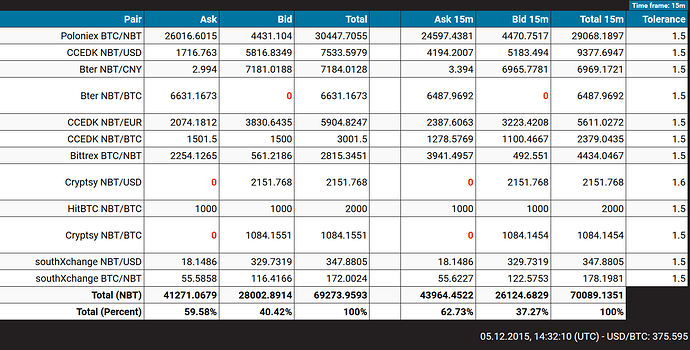