Anyway, may the liquidity be with you!

What a Jedi way of wishing good for Nu.

If the restaurant is full, you won’t get a seat.

If a knife is too sharp its edge is easily dulled.

We all know @masterOfDisaster loves our network and he understands liquidity operations very well. So when he gives us cautions like he has in this thread about a 1% spread, it should give us pause.

masterOfDisaster has stated that he believes the peg cannot be kept by using a 1% spread maximum. Let’s explore that claim a little. Keeping the peg, at least in the time frame you are talking about, is a matter of ensuring that funds move smoothly and quickly enough between the various tiers. We have made a lot of progress in facilitating decentralised transfer between tiers. However, it is clear additional development should and will occur. @masterOfDisaster are you saying that right now you believe funds don’t move quickly and smoothly enough to support the trade volume associated with a 1% spread? If that is the case, do you agree that we should prioritise working enough of the friction out before we move to 1% spreads (assuming my motion passes)? What do you think it would take to get liquidity operations to a place where they can support a 1% spread maximum?

are you saying that right now you don’t believe funds don’t move quickly and smoothly enough to support the trade volume associated with a 1% spread? If that is the case, do you agree that we should prioritise working enough of the friction out before we move to 1% spreads (assuming my motion passes)? What do you think it would take to get liquidity operations to a place where it can support a 1% spread maximum?

Pertinent questions.
The basis to problem solving is asking the right questions.

are you saying that right now you believe funds don’t move quickly and smoothly enough to support the trade volume associated with a 1% spread?

I say that with 10-15% of liquidity in T1 and the same order of magnitude in reserve (in normal situations), there’s neither enough reserve nor sufficient speed moving funds around to deal with BTC going haywire if you have no last line of defence that stands.
The only solution I can think of is one I created in in January this year. I didn’t aim at creating it, it was rather an evolutionary process that included trial and error and was made in many iterations.
I don’t want to repeat it all, a lot of it is buried here in the thread.
e.g. Current Liquidity
If you want to follow the development, read this thread and posts in [Passed] NBT EXIT gateway on Poloniex provided by @masterOfDisaster and [Passed] NBT EXIT gateway on Poloniex provided by @masterOfDisaster

This was the result:

NuBot is still running in dual side mode. The offset has been adjusted to (0.009, 0.009) to reduce the risk originating from NBT being used to hedge BTCUSD volatility.

As the gateway sides were almost balanced due to withdrawals, it has been changed to dual side mode with an equal, but big offset (0.015, 0.015) to create a line of defense if the ALP fail to provide liquidity:

If that is the case, do you agree that we should prioritise working enough of the friction out before we move to 1% spreads

A part of it is the case and from what I can tell, Nu was reacting fast until the BTC reserves up to tier 4 were depleted. Actions like activating NuSafe and preparing NSR sale (in addition to the one required by “Standard and Core” motion) have been initiated.
We are already quite fast considering that we need consensus at some places. It would be faster with responsibility being less distributed. We distributed the responsibility for security reasons. If we find room for improvement, I’m all ears.

I try to make the story short. I’ve already written too much in the last hours.
I’ve learned that the peg can be supported by gateways (and of course other operations) at an increased spread.
A lot of the trading on exchanges seems to be done by bots, which just don’t buy outside a certain spread.
If we don’t want to rely on that, we need to have funds on the order book at that increased spread.
If anybody for whatever reason wants to buy/sell NBT in the NBT/BTC pair, there are those orders at an increased spread.
As long as they last, that buys us time to replenish T1.1 while still keeping the peg, albeit on a degraded level.

I dare say: without the NuBot by @zoro at an increased spread, it wouldn’t look like this: 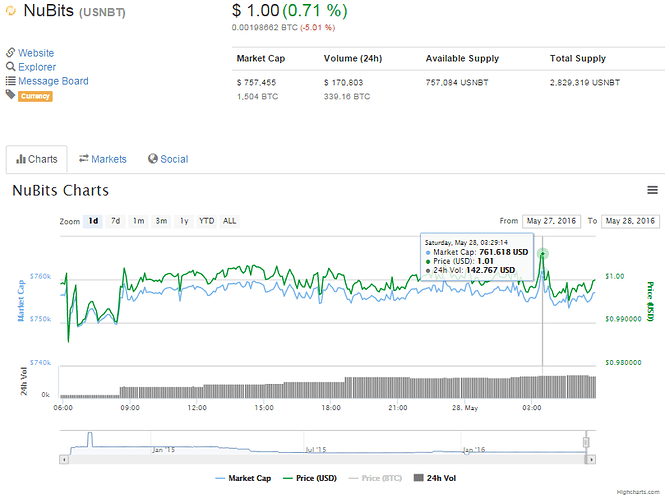 This NuBot traded a little more than $3,000 in Bitcoin since I last had a look:

It would have been empty on buy side since long ago, if it were operating at <1%, just as NuLagoon and all other operations are:

The exception seems to be Bittrex.
@Cybnate, I don’t know how much of the reported liquidity there is from your PyBot (running at 1.4% spread, right?).
I beg you to increase the spread of this PyBot to at least 2.x% if you want the funds to last.

This pretty much sums it up:

I’d never recommend to fill T1.1 from T1.2. Treat them independent from each other.
Replenishing T1.1 from T2. If that’s empty, go to the next higher tier.

T1.2 [remark: gateways at an increased spread] is a defence for the peg once T1.1 failed.

Using T1.2 to replenish T1.1 undermines the reason for having T1.2 in the first place.

I beg you to increase the spread of this PyBot to at least 2.x% if you want the funds to last.

I always aimed for the medium spread with a smaller amount of funds than Zoro. Like my proposal I’m the first line of defence when ALP runs out (which should always provide a high quality peg at <1%). Zoro goes beyond that and that is good. My proposal is set on 1.4% so I will need to pass a motion to make increases happen and I’m not sure that is useful right now. FLOT can decide to transfer some of the funds to Zoro instead of my Pybot, so there is already flexibility in the system.

Edit BTC just broke the $500 and appears to be rising fast, so we have an extraordinary and unprecedented situation. No-one know where this ends. I agree that a low quality peg is prudent as long as this appears to be going.

Do you still have BTC at Poloniex? Or have all been traded to NBT?

Do you still have BTC at Poloniex? Or have all been traded to NBT?

No nothing on Poloniex, only 3.5 BTC on Bittrex. Bittrex seemed to start hedging and bought some NBT today.

If you want the funds on Bittrex to last, increase the spread!
…before traders find “cheap” BTC there…

I didn’t had BTC for a long time on Poloniex. Only yesterday 2BTC was hedged temporarily but sold again a couple of hours later. I think my bot just did what it was supposed to do. Zoro is the last line of defence imo.

I didn’t had BTC for a long time on Poloniex. Only yesterday 2BTC was hedged temporarily but sold again a couple of hours later.

You do understand why you got the BTC traded soon, while @zoro still has BTC left?

At Bittrex there’s no gateway, but yours.
There you are the last line of defence!
Sadly, your BTC there will be gone soon.

At the moment the peg looks great at Bittrex: 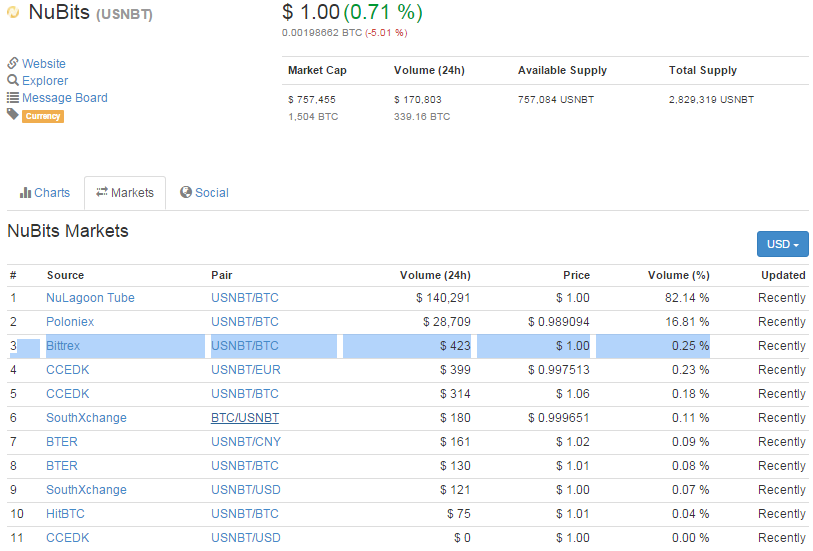 Once your BTC there are gone, it might look worse than it currently does at Poloniex (the line above).

I was surprised that my nubot still has btc in buy side!

It’s no surprise to me.
It works like I designed it.
Thank you for following my recommendation.
You did Nu and yourself a favour!

Yes. Just a question to "liquidity lovers."
If you don’t have liquidity fast enough, what are you doing then?
How you will protect the peg?

all BTC got at 0.005 offset , there are no nulagoon tube to refill my BTC

@zoro, keep an eye on your Nu’s BTC at Poloniex.
I recognized a buy side decrease in the broadcast liquidity, but think that’s due to the slight drop in BTC rate.

If the surge of BTC price goes on, you might want to increase the spread even further.
I for one wouldn’t worry about 4 or 5% spread if that’s “the price to pay” for having peg support at Poloniex at all.

I was surprised that my nubot still has btc in buy side!

At what spread are you operating?

Sadly, your BTC there will be gone soon.

Not when BTC has apparently reached its top, slightly going down now. We will see, no one really knows.
The only thing I know we are overdue to top up the reserves.

Which one to trust? I suppose the gathered liquidity is accurate.

I trust the actual orderbooks in times like this, next best is Alix imo. Gives a nice overview of high and medium quality peg, but is technically slightly incomplete due to the 1.5 tolerance cut.