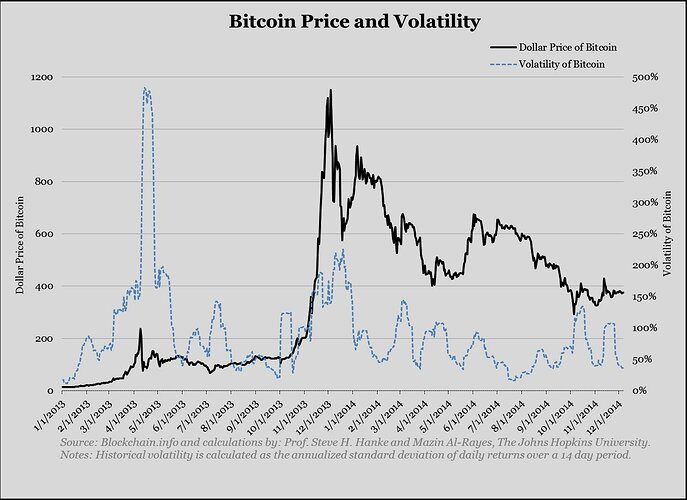 Bitcoin Might Not Be Money, but Cryptocurrencies are the Way of the Future

Expect many more innovations and improvements from cryptocurrency technology. Do not, however, hope for the same from Bitcoin.

This CATO blog post from December 11, is drawn from the work of Kevin Dowd, the author of a recent publication, “New Private Monies: A Bit Part Player?”

While indicating an appreciation for the importance of cryptocurrencies,
Kevin Dowd remains critical of Bitcoin’s future as a currency.
To quote the article:

There is, however, an important line to be drawn between the future of the technology behind Bitcoin and the future of Bitcoin itself, thanks to its notorious volatility. Kevin is crystal clear on the distinction:
Though the supply of Bitcoin is limited, the demand is very variable; this variability has made its price very uncertain and created a bubble-bust cycle in the Bitcoin market. Perhaps the safest prediction is that Bitcoin will eventually be displaced by alternative cryptocurrencies with superior features.

Gee, I wonder which altcurrency could fill those shoes?

The article is quite brief, to the point and will no doubt be encouraging for those following NuBits development.

Let’s carry on with another CATO missive, a podcast from November 10, 2014.

To brutally summarize:
Bitcoin’s decentralization will fail.
The Bitcoin mining industry is a natural monopoly; the miner’s atomistic competition and a natural monopoly are inconsistent. The mining firms will get bigger until there is an actual monopoly.

So it would seem CATO doesn’t care for Bitcoin, but here too the PPC/NBT POS network remains unscathed by CATO’s critical comments.

I listened to this recently. Very succinct arguments regarding concerns for Bitcoins future.

Bitcoin is a seller (last minute of podcast). That said it all for me. My concern is more about the transition. Can they change the protocol in time, I doubt it, although some minor fork adopting POS might survive. Can some other coin take over Bitcoin’s network now, I doubt it.

As I have said before the Bitcoin network is still valuable as many developments exist and are still underway. NuBits should try to find a way to leverage upon this network. Looking forward to the likes of shapeshift.io in the short term which would help to do so while NuBits build their own ecosystem based on the Bitcoin artefacts to maintain some compatibility and protect previous investments of the Bitcoin community. That will make NuNet attractive in my opinion when things really turn to custard for Bitcoin as a currency/token.

I agree with CATO- satoshi ptotocol or data structure is meaningful if and only if it is distributed as much as possible. In other words, it is very powerful and changes the world if and only if there is an atomistic competition.

but here too the PPC/XPM/NBT POS

@derelle. I am intrigued. Why XPM as well?

XPM is certainly difficult to centralize.

Yes, the curious XPM.
Cryptog makes a good point, as XPM is not a POS currency; thank-you for your correction.
My bad, will edit to remove the confusion.
I was under the impression its unique features offering greater security and mining ease to the network, along with efficient verification, allowed it to largely escape Kevin Dowd’s critique re. mining overhead & consolidation. However, as a pure proof of work cryptocurrency, the need for sustained energy consumption to maintain the network would likely always lead to the dilemma of mining consolidation.

Is ASIC miner for XMP possible?

Mining ASIC’s would have to be specifically designed for Primecoin.
Economics will determine their development.

@derelle. Well I do believe Primecoin is the only hope for PoW. Naturally difficult to centralize and potentially useful. So you could monetize primecoins via their scientific value for example.

@miner. Right now no ASICs for XPM are available but maybe in the future…However it seems very difficult.