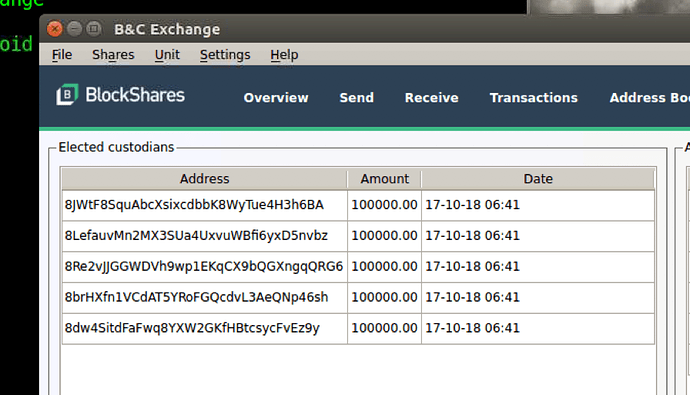 So the number of BKS just bloated by +250%, presumably all to one entity? Fucking lol.

And @Phoenix knows that we know that. I am sure he is going to try to raise additional funds and dilute initial investors heavily very soon. All B&C funds disappeared like magic, and that is very sad because I was a strong believer in the project and put almost 20k into it. But I am done with it as much as I am not interested in investing money into Nu. Not because of the ideas, since they have potential I think. It is because of an absolute maniac with majority control. @Phoenix can decide to…

Does that now make me a clairvoyant?

Man you are always negative. I hold some BKS but I am not sad. @Phoenix and @jooize won’t do that without a good reason. I want to see this project be finished asap. DEX is the future man!

Man you are always negative. I hold some BKS but I am not sad. @Phoenix and @jooize won’t do that without a good reason. I want to see this project be finished asap. DEX is the future man!

My god, all say hello to @JordanLee aka @DEXlover. Fucking muppet show.

The B&C Exchange network has recently suffered from connectivity problems and low difficulty, partly due to a lack of interest. There has been a lot of discussion going on in recent days to revive the mostly forgotten network, as it has become clearer we now have the funding to continue development in earnest.

I independently became aware of these grants less than 2 hours ago. While blockchain research is needed to clarify the situation, it appears these were passed by a single minority shareholder exploiting the recent low difficulty and poor connectivity.

I expect that B&C shareholders won’t allow the grants to stand, and @sigmike has agreed to release a new version of B&C Exchange that contains a checkpoint that will cause clients on the new version to mint on a separate fork that excludes these grants.

BlockShare holders will be able to use the new version of the client to essentially erase these grants from blockchain history, and we can be nearly certain this is what will happen.

Currently, BlockShares are not listed on any exchange. That simplifies our task of creating a fork that excludes the grants. Similarly, it is strongly recommended that BlockShares not be purchased until this matter is resolved, because BlockShare transfers will be forked out, just like the grants.

BlockShare holders should watch for the new version from @sigmike, and use it to mint as soon as it is available. That is all that is needed to resolve this matter.

But I thought this means shareholders have spoken? Isn’t this situation exactly equivalent to the grants that elected you, centralized entities taking advantage of low difficulty and a large accumulation of matured shares?

But I thought this means shareholders have spoken

When shareholders speak this way without any other communication into the forum or elsewhere I believe it is clearly a fraud. Will tag the shares which vote for this. If not, then front up and tell who you are and what you want.

BlockShare holders should watch for the new version from @sigmike, and use it to mint as soon as it is available. That is all that is needed to resolve this matter.

There is no airdrop for you @Cybnate. Forget @serfer, @Tony and @henry. No free BKS for you.

There is no airdrop for you @Cybnate

This is pretty funny. I hope Phoenix feels the irony here really good and hard. The strongest PoS chain could be one that he doesn’t support. I’d mint on both forks just for the lulz and to support the ‘shareholders’ who run the network.

@Nagalim, @lissajous: There is a difference between network connectivity issues causing shareholder votes not to count, and passive shareholders coming out to vote.

Is accumulation of passive shares a real concern for the fairness of voting?

It’s of course legal for shareholders to pass these grants. All shareholders will have still be able to vote for them. Seeing as we’ve been talking about low connectivity recently, and there’s no known plan for these grants, they seem quite clearly malicious.

How long does a grant cost? One week? I didn’t mint B&C for some time, it’s B&C shareholders fault not minting to provide security. We should add a minting difficulty barrier to pass this kind of grants.

How long does a grant cost? One week?

The short and simple answer is that it takes about one week to pass a grant.

DAO governance is obviously in the early stage, please look at Etherium, I prefer company style management, of course, CEO and board of directors can be anonymous as long as they are big shareholders. “Professional managers” without enough shares are not welcomed because we cannot punish them if they commit bad things.

Forgive me, for the stupid question of a beginner. How are NSR and BlockShares related?

We don’t know why. Low interest would naturally cause fewer nodes and reduced difficulty, but it doesn’t explain why some clients had trouble connecting (Ubuntu) while others didn’t (Windows). We’ll set up additional seed nodes to include in the client.

What should the subdomain.bcexchange.org be? seed, daemon, node, nodes, …

@Mr.Crowly: BlockShares (BKS) is the stock of B&C Exchange, a decentralized exchange project derived from Nu. There’s symbiotic value in a partnership between both parties where NuBits can play a large role in the exchange. B&C owns NuShares, and Nu is now buying equity in B&C.

A post was merged into an existing topic: MaVo’s removed posts

B&C does not own a single Nushare.

B&C Exchange’s 237 million NSR are lost, but will most certainly be restored as it’s in the interest of Nu. We want a multisig group and need B&C authority to proceed. I have not prioritized Phoenix’ private NuShares. There are no more details to give.