If there are no orders on the books, and a period of time passes without any new orders being put up, then that means every single market participant has determined that NuShares are worthless

This is clearly wrong. Anyone with knowledge of market making knows that putting orders on the books draws counter orders.

what would you have done, but let’s stay in character and accurate with the facts as they stood in the end of may.

keep a 1% spread, raise park rates as quickly as possible and use NSR sales as much as needed to keep buy walls up.

Anyone with knowledge of market making knows that putting orders on the books draws counter orders.

Of course that is true. No doubt reintroducing a tight spread will result in fewer USNBT in circulation in the immediate term. It is the long term we need to focus on.

The NuShare price action is telling us that there is less confidence in NuBits sales in the future with each passing day.

The NSR rate dropped when it became apparent, that NSR need to be sold to support the peg. People with that knowledge frontran the rest of the market.

The NSR rate is hovering around 300 Satishis until then. 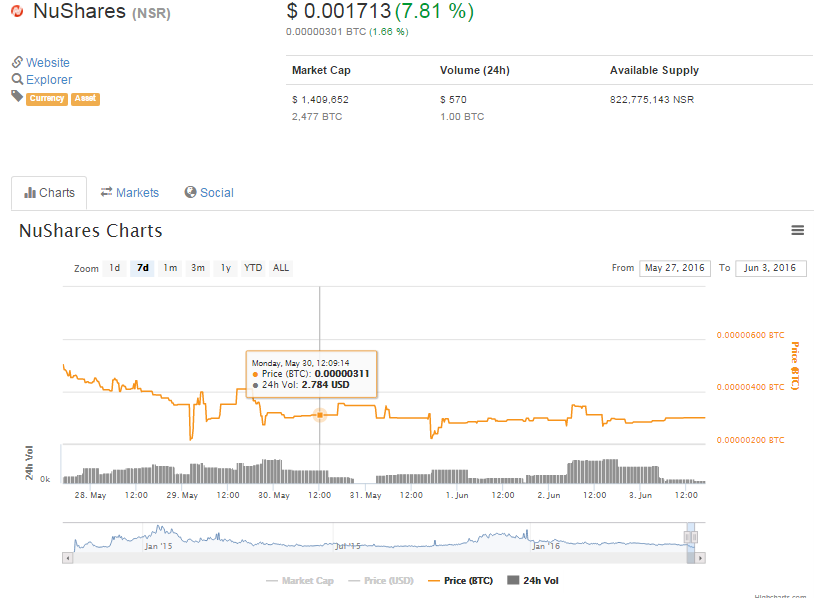 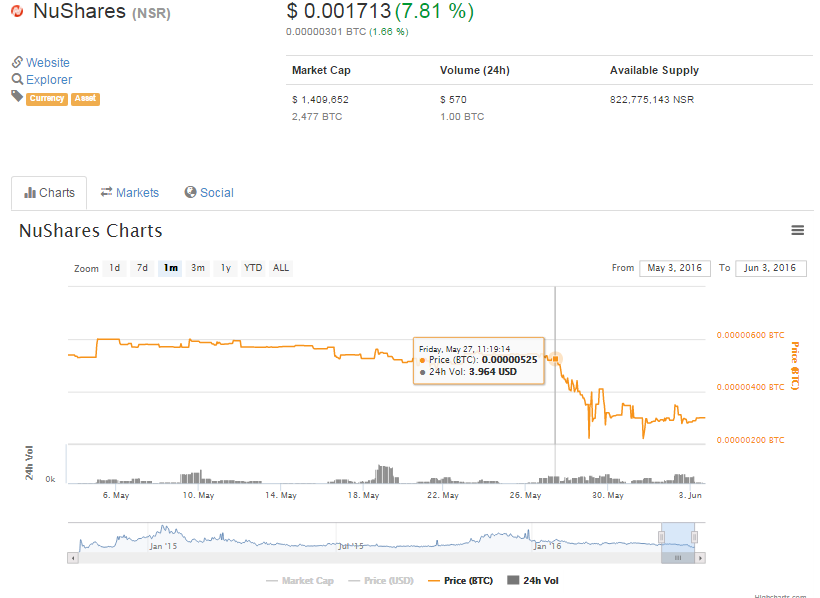 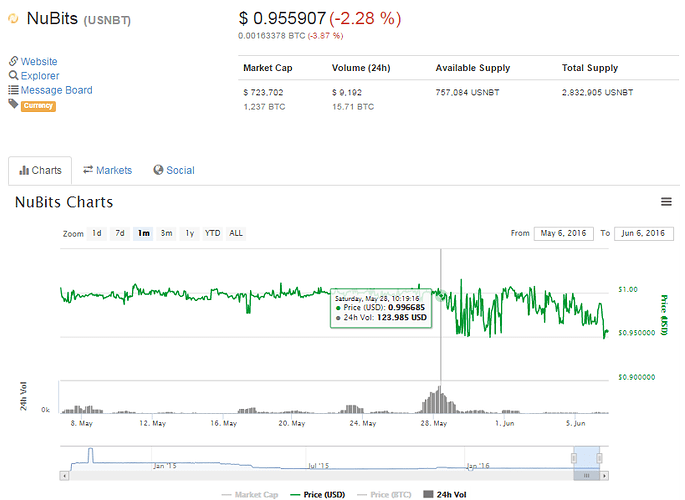 Why don’t you stick to facts? Is it really easier to eloquently present claims as truth?

Addendum - for the record, because the peg still looks quite good the last 7 days: 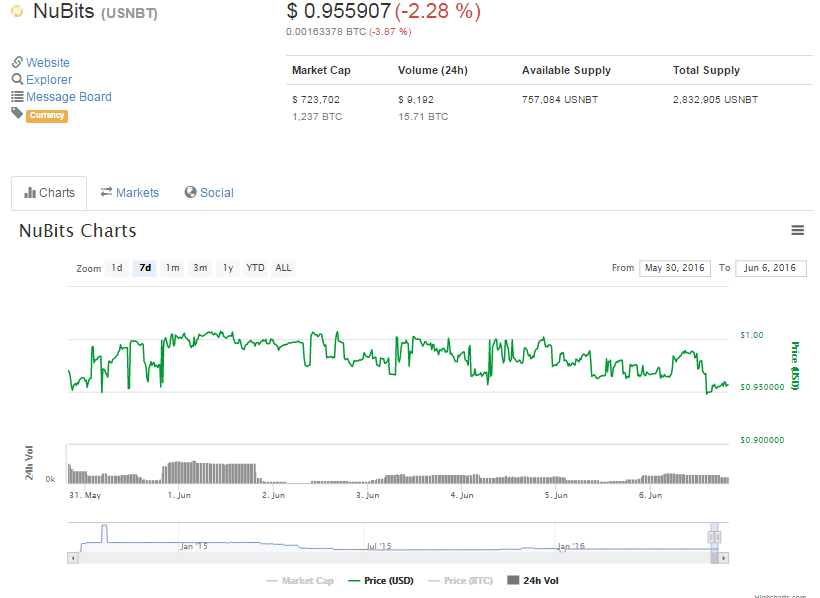 This is how I remember it too.

Did we have regular amounts of liquidity May 28?

I’m beginning to agree with both that and Nu needing to push liquidity in any case.

Please let’s stop with the blaming about things that happened in the past, because it’s unproductive.

Both of these things happened. That’s a fact, but please let’s focus on what we can do now to remedy the situation.

Once we have held the auction and have more Bitcoin reserves, we can recommit to a tight spread and hopefully park rates will start to become effective again after, which could give us enough time until Bitcoin reverses direction.

We can’t put all of the Bitcoin we hold right now into a tight spread, because it could be gone quite quickly leaving us with no defense at all.

I’m on the fence with this. Putting all (or much) of that into liquidity should instil more confidence than just a little liquidity, with the potential result of fewer NuBit exit trades?

I think you are right about that. I’m considering calling it quits. This doesn’t make Nu look good. Especially annoying is the difficulty in understanding what on earth is going on.

Assuming we shouldn’t just actually put everything straight onto the books, as suggested is mandated. I’m going to have to sleep on this at least, and I need to attend a thing tomorrow, with unfortunate timing.

We have 7000 USD worth of Bitcoin on @zoro’s gateway that’s being voted on by FLOT to reduce to 1% buy-side offset (or 1% spread if agreed).

FLOT BTC should consider sending to NuLagoon Tube and gateways at tight spread.

Especially annoying is the difficulty in understanding what on earth is going on.

We lack deep liquidity on buy side (when people want to sell their NuBits for Bitcoins) and FLOT is afraid to use the remaining funds. We argue about whether FLOT has broken NuLaw, whether it’s been the right thing to do, and what to do now. Does this answer it?

We tend to agree what Jordan implies in his motion. At this difficult moment, we, as NuShareHolders, should show our determination in defending the value of Nubit. That is the only way to let people regain confidence in NuBits.

If we put money on buy side and see them to be consumed quickly doesn’t mean it is wrong to put money on buy side in the first place. We should bear in mind that people could sell NuBits for Bitcoin for two reasons, 1. Bet that Bitcoin price will rise. 2. Fear that NuBits wouldn’t liquid out. The custormers leave for the first reason will back in some point of future, however, those leave for the latter reason won’t back again.

This motion has been finalised and hashed. Voting has begun.

Let’s show the world we are committed to maintaining the value of NuBits.

I just made some additions to the motion:

Liquidity providers who have increased the buy side side offset above
that of the sell side offset may continue in other roles, so long as
they do not hold NuShare holder funds intended for use in liquidity
operations.

100% unsure of how this affects me as a pool operator. Any of my custodians can set asymmetric buy and sell side offsets and there’s not a thing I can do to stop them. Hell, I’ve provided them with a shift parameter that does precisely this. How can I undo what has been open sourced?

Let’s talk about who would be fired as liquidity providers if this motion passes. I haven’t reviewed the evidence on this site, but from memory I understand those affected to be:

Have I missed anyone? Do these three individuals indeed meet the criteria for being fired, which is setting the buy side offset in excess of the sell side offset, so that the sell price and buy price do not average to exactly 1.00?

We lack deep liquidity on buy side (when people want to sell their NuBits for Bitcoins) and FLOT is afraid to use the remaining funds. We argue about whether FLOT has broken NuLaw, whether it’s been the right thing to do, and what to do now. Does this answer it?

Is this in violation of existing motions?