Meanwhile the nbt/btc pair is broken for days now. I have sent a pm to Ronny and he replied that they will take care. Lets see

Meanwhile the nbt/btc pair is broken for days now

Might be me, I have an order stuck and I’m already working with their helpdesk for more than 5 days to no avail.
Hope Ronny’s intervention gets things moving again.

That is encouraging, hope it sticks as the difficulty is still rapidly declining.

nbt/usd seems to be broken for 6 hours

I’m considering another grant during the weekend, but it dissappoints me that even 650 NBT for 2 months is no longer worth maintaining this, will change tact with my own voting as ALPs are apparently no longer really valued and NuBots with Shareholder funds are taking over.

I sincerely hope that this is not the reason for the trouble this grant has to pass.

While I firmly believe in the need for a paradigm change, discontinuing ALP first and after that trying to do what I consider a prerequisite:

is the wrong order.

Liquidbits needs to be supported!

Plus it can be doubted that completely discontinuing ALP support for exchanges like bter (even in the light of shady changes of the terms of use) and ccedk is wise.
The first one connects to chinese people and the latter one has multiple NBT fiat pairs.
Especially the fiat pairs at those exchanges don’t work well with single side NuBots and need ALP!

Working on it. It is only server.py which stopped being responsive. It doesn’t kill the task and appears to be very random.
Same error as last time, which seems to be back since being away since October:

Can’t figure what changed other than the bots running at Poloniex. That on itself can’t be the problem, it must be a combination of factors. ;puzzled

The person who can provide code to fix the problem leading to the ‘List index out of range’ issue as described above.

This proposal passed, will update the server with the new parameters soon.

Thanks for your confidence, hope the rates are an example for other future ALP/MLP proposals on exchanges which are supposedly lower risk and solvent.

Stopping and starting the server in the next 10 minutes or so to load the new parameters.
I’ve also updated the address the payouts are being transferred from to: B954pkUEdkeT1G5Lq14Cisij5no3RVxHYe.

Edit: server back up, manual payout underway. Daily payouts will take place around 7:40am (UTC) from now on.

Something is wrong with the server. Ups and downs periodically.

De LiquidBits server is fine, CCEDK’s not. HTTP 500 points to a problem on their site. @ronny
Will log a call, although this should be obvious by now.

Edit: It looks like the problem is solved already. That is fast, thanks. Ronny?

The first one connects to chinese people and the latter one has multiple NBT fiat pairs.Especially the fiat pairs at those exchanges don’t work well with single side NuBots and need ALP!

We have to be careful indeed about which side and which market we are setting the walls, because our product is the PEG and this is about perfect reliability

Is it though? Do we have to be perfect or just pretty good? Our competitors aren’t even pretty good.

For reference CMC data from the last 3 months: 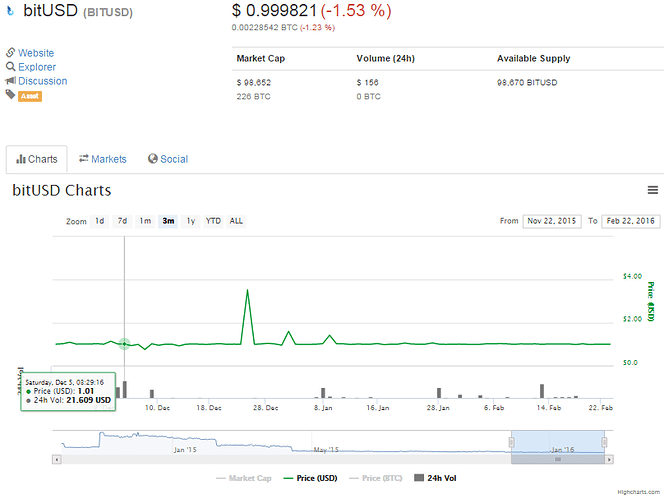 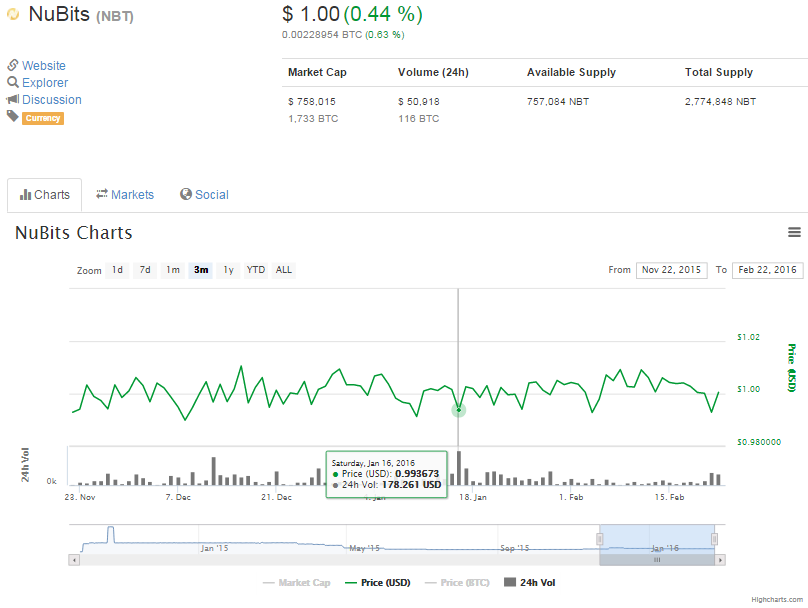 While the spread of bitUSD is much better since BitShares 2.0, the volume is more or less 0 for most of the time and only small peaks of volume, which are beaten by US-NBT even on weak days.

CMC doesn’t report what I see as the real Bit-USD hardly at all. This is because the DEX volume far surpasses the Polo volume. If you look at the polo market on any given day the price can easily be over $1.10 and have less than 1 BTC of liquidity on either side of the books. Right now the value of a BTC in BitUSD on polo has a spread from $370 to $476 (25% spread using mean price) and if you want to buy >1 BitUSD you have to sell your BTC for $345.

Any other more correct site that reports the price?

Nah, I mean it’s not like it’s fraudulent or anything. It’s just that you have two distinctly different markets: the DEX and the real market. Because no one wants to trade on the real market, the DEX becomes the market reporter. It’s like if NuLagoon became our market reporter for NBT, clearly we would always have a good peg (it’s a little different, but I hope you get my drift).