Poloniex NSR wall from the buyback is gone, but another one appeared at 751 Satoshis: 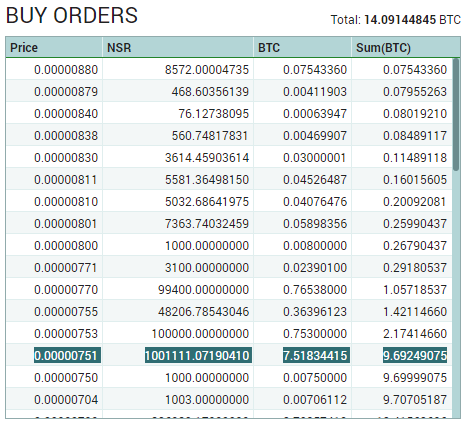 Has the buyback been completed?

So what are the terms that should be applied for this week’s buyback? I am confused.

At some point today ill buy a bunch of nsr and burn them.

Is that according to the applicable motion? Could you provide me with a link?

There is a link in the OP

“If any excess funds remain on Friday they will be used to purchase NSR from the sell wall on Poloniex, up to a maximum of Thursday’s market price plus 50%.”

We started using bter in addition to poloniex, so while using bter goes against the explicit terms of the motion, i feel @tomjoad achieved a sense of shareholder consent for doing buynacks on bter.

Ok and now you will purchase NSR step by step during the day or will you do it like Tomjoad, buying up into a certain wall in one move?

This is still true two hours later. Please be patient.

The burn should be posted this weekend. I recommend FLOT and shareholders consider depositing more to Poloniex, as that seems to be where much of the volume occurs recently.

I have a withdrawal limit that can handle most any volume in just a few days.

i take down the walls

if you do this for an extended period of time, those who wanted to sell into the buy wall then won’t be able to do it.

Its very hard to move funds between exchanges when they’re in a buy wall. The procedure is to leave the buy wall at 100% price for approx 24 hours and if it hasnt been eaten why would I expect another couple hours to make a huge difference? The wall is taken down so I can rearrange funds ad get prepared to buy into the sell walls. Im not sure how I would do that with the walls still up without attracting manipulation.

I take that you are moving part of the wall to the other exchange where there are better sell orders. You d on’t need to take down all the buy wall. But I agree it’s not a big problem.

If i leave part of the buy wall up then traders know precisely how many funds i have on each exchange and can use that info to manipulate me, knowing i have to go through the congested btc network to move funds back and forth if traders take down or put up orders.