Last time I checked with @jooize, there were no bids yet.

I have received one bid since.

Does it seem reasonable to cancel it anyway? We could also define the reserve price as 70 satoshis, which I expect will be functionally equivalent to cancelling it.

I’m not completely comfortable with cancelling, but I think it is acceptable under the circumstances. I rather cancel than change how we set reserve price for an ongoing auction.

I can notify the bidder we’re cancelling the auction because of new circumstances and updated policy. Shall I also offer them the amount they bid for at 70 satoshi?

I’m not completely comfortable with cancelling, but I think it is acceptable under the circumstances.

I feel the same way. We need credibility from a certain continuity in our operations. We have to do what we say. But we also need to adjust the policy as market conditions change. Market conditions have changed since the auction was announced. To keep our core policy the same, we have to change the implementation to match market conditions. We add sell side pressure sometimes and other times buy pressure. As such switches occur, the core policy of maintaining a stable currency remains, even as the actions taken to meet that goal change dramatically.

Our core policy of supporting NuBits and protecting NuShare liquidity remain unchanged, but market changes the last couple of days suggest a shift in policy implementation.

One aspect of the proposed policy that is very much an imprecise art is setting the minimum NuShare sales price. That is why I am especially keen to see alternative suggestions to my 70 satoshi suggestion. Too low and we impair the liquidity of NuShares unnecessarily. Too high and we simply aren’t supporting our currency. What is the sweet spot?

I’m not completely comfortable with cancelling, but I think it is acceptable under the circumstances

I don’t think it’s honest to cancel the auction after announcing it. The rules have been defined for the auction, and I think they should be followed. That’s a way to help show that everything is above-board.

Go through with the auction as promised, then apply your ideas to Auction #11.

Do you know how this smells?You bought NSR at 42 Satoshis, dumped NBT to get your BTC back and now you want to pump NSR.

@jooize do you know for sure that the buyer was not Jordan? If it was, what a trick. Wow.

Too low and we impair the liquidity of NuShares unnecessarily

Isn’t the whole debate between JordanLee and the rest of shareholders that the ‘others’ did not want to dump NSR for a low price when JordanLee felt it must be done and blames this as the reason the peg was collapsed?

This statement from JordanLee’s alias is incredibly ironic.

@jooize do you know for sure that the buyer was not Jordan? If it was, what a trick. Wow.

I have no indicator for that being the case, and nothing substantial for the contrary either of course other than that the conversation I had with the buyer didn’t resemble his style. My impression from talking with @Phoenix is that he’s not the scammer some insist on.

Isn’t the whole debate between JordanLee and the rest of shareholders that the ‘others’ did not want to dump NSR for a low price when JordanLee felt it must be done and blames this as the reason the peg was collapsed?

This statement from JordanLee’s alias is incredibly ironic.

I’m not completely comfortable with cancelling, but I think it is acceptable under the circumstances

I don’t think it’s honest to cancel the auction after announcing it. The rules have been defined for the auction, and I think they should be followed. That’s a way to help show that everything is above-board.

Go through with the auction as promised, then apply your ideas to Auction #11.

This is reasonable. I will support continuing with the auction already announced to close this Friday if @jooize wishes to continue with it. We may be a little short of NSR on hand, though. I will ask NSR FLOT to fund the auction. If we can’t get the NSR, we will obviously only sell what we have.

After that, auctions and large purchases will cease until the NSR price is over 70 satoshis.

Ridiculous is putting words into my mouth when the facts remain and show otherwise. If nothing else, JordanLee and the ‘others’ simply disagreed on what constituted as ‘absolute zero’ which I can only assume was meant to not be taken literally and is therefore subjective and hyperbole.

Perhaps we can rebuild the peg in 2017, but all of us now know that tier 6 is shit. Never use NSR again to support NBT, try to find some real revenue.

My impression from talking with @Phoenix is that he’s not the scammer some insist on.

My impression from oberving his posts and actions is very different from yours.

Please explain in your own words why Nu is no pump&dump/ponzi scheme.

Do you really not see who is able to profit from that by pulling the right strings at the right time?
One who knows how the policy will be changed could buy NBT low over time and dump them on a 30 BTC wall at $0.85 that appears at the right time.
One who would know that the NSR rate needs to be protected (not sold for below 70 Satoshis) could buy them in the auction for 42 Satoshis.

But worst of all: revenue is something Nu seems to be afraid of.
Hopium won’t fuel the liquidity engine.
Without a sustainable business scheme with revenue, it remains a ponzi engine that is used to run a pum&dump scheme on top of it.

You don’t want to see it, right?
It’s easier to call me paranoid.

This experiment is just a joke. If the community had any seriousness about making the project work they would realize the founder needs to be eliminated. You continue to give him trust and he continues to manipulate you.

If the community had any seriousness about making the project work they would realize the founder needs to be eliminated.

This has been identified as well as ways to get there.
But it’s hard to get it done, because Nu is bankrupt.

With what funds would you purge Jordan from the network?
You need a hard fork, need to advertise it, need to get exchanges on your side.
That requires money and that’s exactly what’s lacking.
Nu’s wealth has been spent mostly on liquidity operations.
Maybe a new experiment that incorporates lessons learned is better than starting the battle with a hard fork that tries to continue Nu.

I wouldn’t say the community isn’t serious about it.
But from some of the angry comments I gather that a lot of the community feels betrayed.
Most appear to have resigned instead of fighting for a lost cause. Just look at the forum activity.

The community is important, if eliminating evil actors is to be attempted.
But the shareholders are important as well.
After all it’s their business.
These groups aren’t necessarily congruent.

I’d be happy to see a new experiment to provide a stable currency where all the helpful, diligent community members are the shareholders of that DAC.

I only have a few recommendations to improve the business processes by far compared to Nu:

There might be more recommendations, but off the top of my head that’s what in my opinion at least needs to be improved.

Not sure I understand what you’re saying.

I’m not ignoring the reserve price. I did however state that I can agree with cancelling the auction, albeit would prefer not to. Those may be considered similar, but I felt it more honest to cancel. Cancelling is obviously unfair to bidders, and may be against common auction conduct.

If I misunderstood you, I apologise.

Is the auction being held as planned? 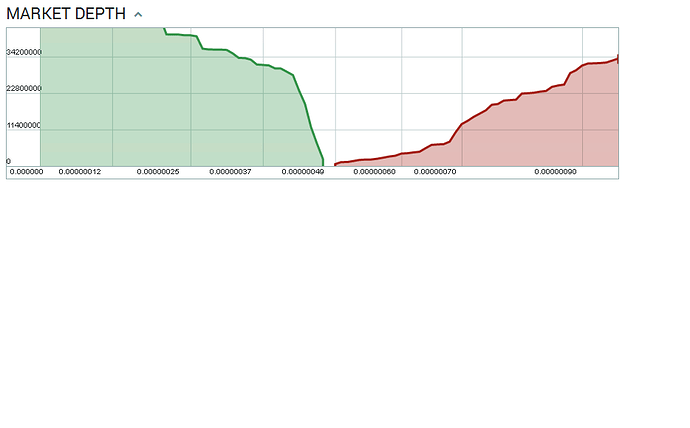 The market seems to have received the memo that we won’t be selling many NSR below 70 satoshis going forward (the daily limit is 2 million NSR). Since I announced that two days ago, the buy wall has steepened and the sell wall has become quite thin up to around 70 satoshis. There are only 8 million NSR available below 69 satoshis. Not much buying would be needed for us to see a 40% gain from the current price of 48 satoshis to the high 60’s.

The number of NSR for sale on Poloniex has dropped from 199 million about a week ago to 175 million right now. A consensus is building that this is no time to sell NSR.

In recent times, liquidity operations policy has been to have a minimum quantity of NSR sales per day (2 million recently), with additional sales only allowed above specified satoshi (Bitcoin) price levels. The specified price level was 70 satoshis. Market price levels have far exceeded that in the last half day. Therefore, we have sold additional NuShares at higher price levels in the last half day. Our policy is to sell 1 million additional NSR at each satoshi price increment (note that actual sale prices have been higher in most cases as we placed market orders; this just controls the quantity of NSR sold). We have already sold 31 million NSR in the last half day. That means the lowest price we will sell NSR at right now is 101 satoshis. We will sell 1 million at 102, another million at 103, and so on. This balances our need to support our currency with NuShare sales while not extinguishing the bull market underway. Note that as before, there is still a minimum daily NSR sale amount. I am raising this from 2 million to 3 million NSR per day. To sum up, the policy is to sell a minimum of 3 million NSR per day, plus 1 million per satoshi increment, currently at 101 satoshis.

We have purchased over 25,400 US-NBT in the last 12 hours, which is approximately 8% of the money supply, including NuLagoon funds. We have purchased all US-NBT on the sell order books at Poloniex at and below $0.995 on four separate occasions. With a 1% spread, that is full price restoration. $1 NuBits. We will need to turn our attention selling US-NBT once again. We will always use a symmetrical spread when doing so.

More information about building a buy wall will follow soon.