Think about this. If Bitcoin’s price will be 30k dollar. Nubits team will get win without effort.

And I will lose vast amount of bitcoins instead of getting little money.

I m not aggree with you , i store a huge amount of money in Nubits few weeks ago, and i m really concerned about all my money.
I know it s hard but , no matter what happen to Bitcoin the main concern is to go back to 1$ in the shortest time possible. That s why people with management/finance skill should suggest ideas to go back on tracks.
I have almost nothing to trade anymore but we 're speaking about trading , would you buy now the Bitcoin is very low on a support ? may be it will go more down if it breaks it and you would loose more, may be not, we don’t know , the only thing we know for sure is that our money is kind of frozen for now.

I really don’t like this situation , as everyone , but let’s try to find solution together.
We don’t need more fear on the forum especially for new investors.

For all new investors! Consider the best time for investing in Nubits to be right now, this very time! After years of almost constantly seeing the value of Nubits in coinmarketcap at $1.00 it feels like a dream come true, unlimited money! The peg will eventually get restored, last time the peg was broken the value dropped as low as $0.25 , meaning investors made 4x on their investment on a period of months when the price restored to 1$ . Now in no ways am I saying that the peg being broken is a good thing, no no no,(I actually lost a bit) however we should take advantage of buying opportunities like this while we can. Eventually some whale, maybe even Nu itself will buy up all the Nubits, slowly but surely, then hold, until the value is completely restored.

No whale is going to buy into a project with a ten million USD financial hole and the existing stakeholder control and leadership remaining in place after they at best screwed up and at worst somehow stole (some of) that money.

At an absolute minimum there needs to be massive dilution (90-95%+) of existing holders and all existing leadership voted out. If that doesn’t happen there is no chance you will see your money ever again.

Ten million USD is not going to just fall out of the sky and bail you out.

Also, bear in mind that the previous peg failure occurred with less than one million NuBits outstanding, not ten million. The situation is massively more dire now and to expect a repeat of the relatively painless recovery that occurred last time is not realistic.

With all due respect, if you have absolutely no faith in Nu and of its ability to recover from a broken peg, liquidate your Nu assets (if any) and leave this forum. You are not helping with the current situation if all you give is negative commentary.

Pointing out that major changes are needed is not “negative commentary”, it is the only constructive path forward.

If you want recovery then you should embrace the need for change, not keep on the same path and expect some magical rescue, while attacking those presenting a clear factual analysis of the gravity of the situation and suggesting that they leave.

The idea is not to make you feel better by sugar coating, it is to actually fix the problems.

But we will see whether there is actually any appetite for the perhaps bitter tasting medicine that is necessary.

Yeah, um, maybe when the price gets near $1, we can start throwing the heretics out agian, k? Until then, any and all ideas are welcome.

I have proposed multiple ideas to the Nubits team, all which require a temporary reduction of coins in circulation. Commentary which does not help Nubits in any way is negative commentary, strictly for the sole purpose of making Nu look bad. We know the current state of Nubits is not desirable, but there is no need to state it over and over again! Instead it would be more beneficial to comment your ideas on how to fix this mess, if you have none then why are you in the forum?

your ideas on how to fix this mess, if you have none

I read it. Mediocre at best. Basically you are saying screw all current Nushare holders and dilute the living hell lights out of them (a form of theft). So you are basically saying everytime we have problems with Nu we should dilute and kill the Nushare holder to solve our problems? Very bad reasoning. My proposal does not involve dilution nor burning of anyone’s assets, dilution sounds criminal, look at Venezuela!

Mediocre at best? Does that mean you don’t like the Chief of Liquidity Operations? Maybe you should do your homework to understand what the chief himself has to say about Nushares. Restrictions of Nushare sales have never been a topic. It is now because @Phoenix and @jooize don’t want to lose their well paid positions.

The market prices of NuBits and NuShares are the result of many interactions of unpredictable and unknown actors, so they cannot be forecast with certainty. However, I believe we will see the NuShare price rise as we reduce the rate of NuShare sales, which is a process that began yesterday. Let me explain why. NuShares are no ordinary crypto asset. Aside from the pioneering model of governance they facilitate, they are designed to be the most volatile crypto asset. This is because NuBits were …

And I’d like to add here: the post I quoted above is so funny to read considering the current situation. It’s a joke in itself. Back then decentralized liquidity providers were to blame. Now it’s the lack of exchanges and @jooize “admits that marketing has been neglected”. The answer is so much simpler:
@jooize has no clue about finance.

Trying to build a low reserve system with such a small market is completely ridiculous and would only be done by those who would like to play the system. That’s why I wouldn’t say that @Phoenix has no clue about finance, but instead emphasize that @Phoenix does know a lot about finance! And he has anonymous, you know? (just saying…)

@jooize if you pitch the model to large investors, do you hide information about the inner workings of Nu? Do you tell them everything? Thefts, hacks, losses, anonymous payments to “contractors”, forum bans, low reserve despite calls for high reserve, peg breaks, no multisig at all for most of the tim for millions and millions of USD in assets, your knowledge about financial markets, @Phoenix arising from the ashes in a religious act after @JordanLee has been buried (my god now it gets ridiculous, I should stop, and I will).

Please pitch the whole story if you have enough time. I am sure you’ll find some “special (seed) investors” that will help Nu out, but only if there are “private Nushare sales off exchange”. Good luck!

I am surely enjoying 155% returns on my Nubits, somehow some whale actually purchased them just how I predicted :o . Sorry you chose not to buy them when they were 30 cents a pop! This teaches a lesson that everytime Nubits are worth below their peg it is instantly a buy opportunity 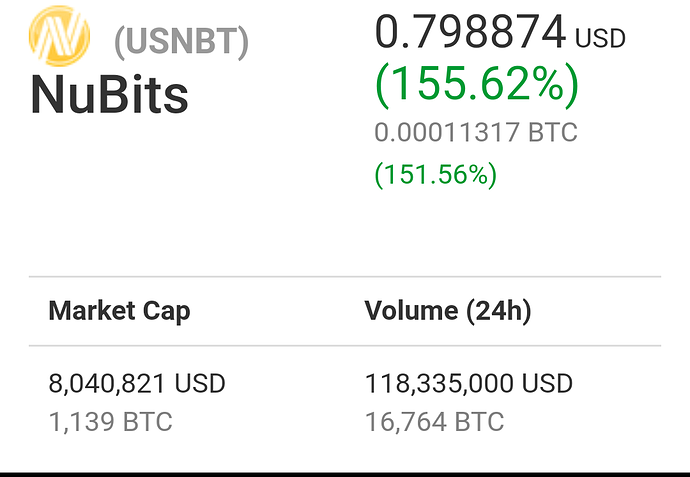 Every time that is, unless it’s the last time & confidence doesn’t return. There’s a real risk of that when there’s not yet a plan in place to make Nu profitable and stable through tough times as well as good.

I hope a path forward is found, and do think that those who buy in when it’s low deserve the gains, as they’re taking a risk while helping provide demand for USNBT, keeping it from falling further.

It is important to remember that the only reason the peg has been restored in the past is the same reason it is being restored today, quite simply some people that trade Nubits simply do not even know what it is.

A high percentage of those people/accounts are just bots trading random currency pairs, some bots try to get in when there are signs of sharp increases which is really why the peg always has a high likelihood of being restored.

If anyone knows a slight thing about the crypto market, it is obvious that when Bitcoin, or ETH rises so does almost everything else in the crypto market. Recently the market has been very bullish, and Nubits has been slowly loosing points, the market cap has increased so much in a short amount of time that I suspect Nubits will recover soon because Nubits is simply overdue in reflecting market appreciation.

And trust me, only a small percentage of Nubits buyers actually know what it is, it is usually just bots trading bollinger bands or some other combination of algorithms.
So I can understand you guys saying “Well confidence has been completely lost”, but really, bots do not have feelings, they just buy into the highs making impatient human traders impulse buy and thus allowing the coin to appreciate inorganically. As a disclaimer: Anything can happen so take advice with risk management.

Everytime… Can you imagine how sad when NBT holders find its peg broken? So we are giving a impression to the public that NBT is less stable than USDT.

I am sure it must have been a really disappointing feeling, but most people simply don’t use USNBT to hedge volatility, it’s the sad reality. You rarely ever hear anyone seriously using Nubits the way it should be used, it’s really just bots trading their designated currency pairs, you see millions of dollars in daily volume, where are all of those users? There should be at least a couple thousand active members in this forum if they all knew what Nubits was, the reality is that the volume comes from people using bots to trade for them. When the peg broke, 7 million dollars were lost quickly. Where are all of the sad devastated people that lost millions or hundreds of thousands of dollars? Sure there are some and I feel sorry for their losses. However apart from some, there mostly isn’t any, surely not 7 million dollars worth of complaints, why? Because bots don’t complain, the owners of the bots were inherently taking a risk and when they saw their investment went south, they understood the risks associated, as with any investment. As to you including USDT, USDT is the joke of the century, do you really think Tether.to has $2.287 Billion dollars in a vault somewhere? I highly doubt it, it will collapse soon once people realize Tethers are backed by air.

What is more important?
I see a lot of post about issuing or not new coins, but would not be more important to be listed in more exchanges and give Nubits more uses? And wait for the demand for the coin raise naturally.

You definitely right.
I’ve been told that the Nu Staff is growing in order to compensate the marketing weakness. They are preparing new plans

For sure, they will go throught the regulation steps since the exchanges are picky on these details.

We just need to wait and cross the fingers

here is the official channel

You can view and join @NuBits right away.

You can view and join @nubitsunofficial right away.