right. it would be a slightly twisted double spend so it won’t work.

Can’t broadcast, probably because the old tx is still in my mempool.

NuExplorer’s time appears to be 10 minutes ahead.

By getliquidityinfo there appears to be an 35k overflow in T3 buyside, on NuLagoon. It would be good to send 15k NBT to NuLagoon Tube, but only the old BTC address is registered with NuLagoon Tube.

That would be great, thanks.

I propose to balance NuLagoon by 15k NBT. Alix wall shows ~15k buy side excess in tier 1, and about 35k excess in NuLagoon T3.

(Verify link goes to making a new transaction, not the actual transaction.)

Hmm. Shouldn’t we send half to balance?

Shouldn’t we send half to balance?

From a mathematical point of view I agree

But as you spent again efforts to create and sign a transaction, I preferred to sign it.
Can somebody please remind me why the sell side and buy side need to be balanced (without taking into regard absolute numbers)?

We want to take this opportunity to sell nbt for btc. Demand seems to be going up so we need to increase supply a little. Or is your question specifically about the tube?

Demand seems to be going up so we need to increase supply a little.

It’s not specifically about the tube.
I understand why Nu wants to sell NBT.
I just don’t understand why the ratio is more important than absolute numbers.
The NBT sell side was down to approximately 40%, but there were still 45,000 NBT available (all exchanges combined).
Poloniex alone had 18,000 provided by ALP.

I know there’s a desire to keep the sides balanced.
But my question for the reason (without taking absolute numbers into consideration) was meant seriously.

ok, but the tube only has 8k sell side. I agree there’s not much we can do on polo right now, even if the sell side goes under 10k, but the tube we can easily balance. If I can switch perspectives, why not balance it? There’s something to be said about price and us buying at the top here, but I do think demand has increased and the Tube should be a reasonable way to put some nbt into circulation.

I don’t find balancing bad.
I just don’t understand why a ratio is more important than looking at the absolute values as well… 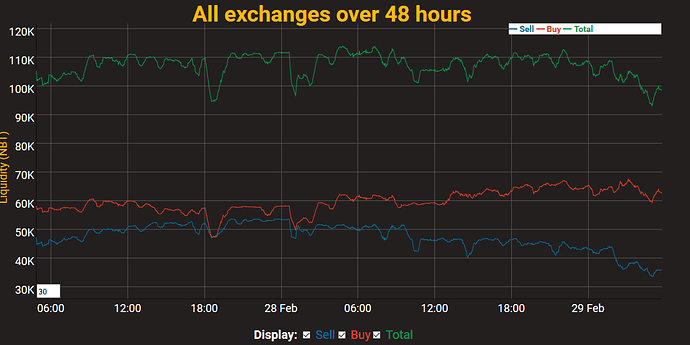 The sell side has increased, indeed, but mostly it’s been a decrease of sell side. I think the absolute numbers also show that we should do a balance.

I explained that there’s over 30k overflow in T3, with 35k in NuLagoon. Also T1 would also have been roughly balanced after exchanging taking 15k NBT off NuLagoon Tube sell side. I hope that’s what you meant by absolute numbers.

With absolute numbers I mean that as long as an absolute minimum of funds is available, I don’t see an immediate need to balance, even if the sides are 40/60.
Say there are $45,000 on a side with a majority in exchanges, which are considered important at that time (say, Poloniex, NuLagoon Tube).
Why should there be need for a balancing just because the other side is above $45,000?

There are many facets to this issue, one of them being the cost-efficiency of NuLagoon itself. But to directly answer your question, why should we wait until there’s an immediate need before trying to rebalance? The gap that was observed was not a trivial one, even though it did not signal a true emergency.

You assume that there’s always somebody able to constantly monitor the situation, react prompty and then lead to a fully signed transaction that will be confirmed within the appropriate time frame to deal with an imminent threat to the peg. This is not the case, and it is evident that fast response in T1 depends on the availability of funds of each individual LP/custodian, and FLOT spends more time worrying whether it’s nagalim or zoro or you who would next wake up for us to send funds to, and then worrying who will be the next person to sign. The reason is that, in a stable state, we individually focus on the type of imbalance that is of the main concern of our own roles, and when a particular party needs help they communicate.

When facing a truly urgent situation, what I’ve seen is that we end up having to scratch our heads on the most effective way to deal with it. Something like this: Oh liquidity is now 30%, oh but it swung back up to 40%, shall we sign this transaction? NuLagoon is dry, henry’s sleeping. Now lets see if zoro is there to get his NuBot working, but hey woodstockmerkle isn’t online yet, he’s should be waking up in 2 hours to sign this. k jooize is up GOSH WHEN WILL IT CONFIRM and then it takes another hour to end up in Polo.

Now as I’m writing this, there’s a 10k gap in T1, despite a heavy load of sell-side in NuLagoon Tube. It’s still not perfect, but if he hadn’t sent in the 15k we’d be doing the above right now, Without watching out for rainy days, we end up doing that more often; now we can afford more time to think and plan. For a while I found myself spending more time checking the next person to come online than actually thinking about the network. This is why it was also suggested that a regular balancing of custodian funds can be a good thing, and is the approach taken by nagalim. By more lenient terms of somewhat regular re-balancing we’d even be putting less pressure on T1 custodians, so it’s not just sweeping problems under the rug to save time for FLOT members.

Furthermore, with NuLagoon Tube’s pledge to waive fees and spreads for known LPs, it becomes a very good venue for NuBot custodians to balance their own liquidity. I have yet to confirm a working example for T1 custodians, but I anticipate that under an imminent threat some people will try it with some good volume. A healthy balance of NuLagoon Tube will actually reduce the need for direct FLOT interference in these situations. I appreciate that you signed the transaction promptly even under doubt, but the timing that I proposed the transaction at least would not have allowed a small debate to endanger the peg.

Assuming this workflow, more diligent balancing becomes possible; although this concentrates a lot of trust on NuLagoon, it is little more than what we’ve assumed from the first time we pay them for liquidity provision. This is indeed something to watch out for, as is the issue of how much responsibility NuLagoon is supposed to take, and more discussion and concern on this are definitely welcome.

Just some notes on what might be improved next:

I agree with a lot of what you’ve written, but I still don’t see why we shouldn’t consider the liquidity situation ok, if a sufficient absolute number of funds is available and still beg for taking that into consideration as well.
If there are are $50k on buy side I don’t care whether there are $100k on sell side, if the situation would be considered ok with $50k each side.

All Im trying to say is: we should care about a balancing, but about a minimum in each side as well. And I for one find the absolute numbers (maybe in relation to NBT in circulation) more important than the ratio.

Only looking at the ratio creates an attack vector, which can be used to trigger continuous balancing efforts just by placing and removing BTC on/from buy side.