The timer starts when he tells me how much to sent him (agreement).
You cannot actually compare 1 person’s reaction vs 5

Technically it’s mostly me caring for it, not really appropriately. I hope @henry could step in soon to move money from tier 3 to tier 1.

We could agree to put say 50 BTC in a 2 out of 8 multisig address, exactly for reasons stated above. If only 2 out of 8 would be needed I think FLOT reaction time will be much quicker. Although technically it would better to fix tier 1-2-3-4 flow so that FLOT is not required to balance tier 1.

Fixing the flow is the solution.
Having 2 or 3 of 8 addresses with some funds on them should be a viable workaround.

I imagine FLOT will usually be a lot quicker than 24–48 hours, but the delay concerns stated should be addressed anyway.

I have to say I’m uncomfortable with only 2-of-8 if that approach would go forward. Can you motivate it? 3-of-8 seems much safer with only one more, which I hope wouldn’t affect response time very negatively. Not that I think anyone is about to run away with funds, but I’d plan around the possibility whenever feasible.

With Jordan we had a 24h window but the transactions were settled in less than 30 minutes usually.

The timer starts when he tells me how much to sent him (agreement).

I didn’t catch how those times would be applied. What should happen if FLOT takes 30 minutes, and when it takes 30 hours?

At how many confirmations should we consider a transaction secured?

There was an alternative suggestion at 10 BTC, but it’s better they explain it themselves.

The procedure is ok.
(1) and (2) could be very fast, matter of minutes.
(3) needs the most time since it needs 5 FLOT members to sign the transaction
but by the time the transaction is signed, BTC could have been changed and thus one side
would gain and the other would loose, probably. More time, bigger the risk.
(4) is lighting fast, since the addresses i use is polo’s and thus the bot take care of liquidity.
Polo needs one confirmation for BTC and 10 for NBT. We can keep the same scheme

This procedure could be applicable with every ALP and MLP custodian.

no buy fund inject to polo?

I have to say I’m uncomfortable with only 2-of-8 if that approach would go forward. Can you motivate it? 3-of-8 seems much safer with only one more, which I hope wouldn’t affect response time very negatively.

Share that nervousness, a little less risk given the fund sizes would be better. 3-8 at least, maybe we need to add more FLOT members in order to end up with more ‘quick’ signers?

While the overall liquidity (T1-3) accross all exchanges still is ok: 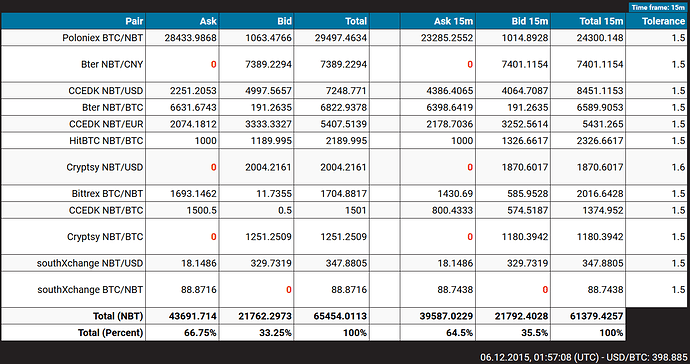 However the spiking BTC price emptied the buy side (T1) on Poloniex to a level that calls for action. Is anybody willing to trade funds with FLOT or @JordanLee to put them in a liquidity operation on Poloniex’ buy side? @zoro maybe?
@henry any chance to balance walls at Poloniex? The buy side really needs some funds.

There’s almost no volume on buy side within the spread left on Poloniex. There might be in total 34 BTC on buy side, but at rates way beyond what Nu considers pegged to USD.

I am currently serving as a backup to FLOT’s tier 4 buy side support, and I plan to activate in that role when buy side drops below 35%, as it is currently. I see FLOT is in the process of trying to negotiate a trade, and that ought to continue. I will start with buying 4,000 NBT where the BTC proceeds will show up on the Bter buy wall. I will leave all other balancing efforts up to FLOT.

@henry any chance to balance walls at Poloniex?

NuLagoon will be promoting 20 BTC to Poloniex soon.

We also suggest the community have some try on other exchanges, such as HitBTC, so we can avoid letting the most NBT trading depending on one exchange.

We also suggest the community have some try on other exchanges

Glad to see some action

BTER has rebalanced itself, somehow

Once again Polo’s buy side has problem. i have sent a pm to Jordan to do something about it ASAP

We need to introduce a pay scheme in Poloniex to pay ALPs depending on the liquidity.
I guess a “special” fixed cost scheme?

So other than paying more to the weaker side (already covered under fixed cost) what other modifications would you make?

I was thinking for an unbalanced payout depending on the sell/buy liquidity amounts.
Fixed cost has fix payouts for either side, correct?

The amount is fixed while the rate is not. Basically, if you provide on the buy side when it’s at 10% and the sell side is at 90%, you’re getting 9x higher rate than those on the sell side.

I think for now we should just try the normal fixed cost and see what happens. Currently, polo is operating under fixed reward still.

With tier 1 buy side liquidity currently below 35%, I am activating as a backup tier 4 liquidity operator. I intend to use this gateway to inject 25 BTC into the Poloniex buy wall in about an hour.